For a while, my eBay foraging was focused on vintage Design Spectracolor Pencils, including the more elusive Doublecolor version that I came across serendipitously. Once I had acquired a decent range of these truly delightful colored pencils with soft, rich cores, they dropped off my eBay radar.

Then one day I spotted something extraordinary in the middle of a large vintage pencil lot: Design Watercolor Pencils! The pencil branding and design looked identical to the Eberhard Faber Design Spectracolor pencils I owned except the barrel was stained and varnished natural wood instead of painted matte black. This was the first time I had ever known that a water-soluble version of this pencil line existed! How had I not seen it before? After much internal debate about not wanting to be saddled with the rest of that lot, I reluctantly let it pass.

As soon as I started searching for these Design Watercolor Pencils, I realized why I hadn’t spotted them before: They are scarce, indeed. I kicked myself for not going after that lot. Sometime later, another set appeared on eBay, and this time I bid actively for it, but at the last minute, a sniper app swooped in and grabbed it. Design Watercolor Pencils remained a grail, as I have not seen any more come up on eBay again.

A while later, I was having an email correspondence with a blog reader who was also interested in vintage Spectracolors, and I told her of my grail. She had managed to acquire not one but two sets of Design Watercolor Pencils – and she offered to give me one! I don’t know how I’ll ever repay her for her kindness and generosity, but I am certainly thrilled to have the set.

The 12 pencils came in a vinyl case that is of the same design as the non-watercolor Spectracolor sets. Neither the pencils nor the case include manufacturer information (the pencils say only “USA”), but my benefactor told me that they are of the Eberhard Faber era. That would date them to before 1987, when EF was purchased by Faber-Castell.

As mentioned, the round barrel is unpainted wood stained reddish-brown and varnished. The round end cap indicates the core color – a feature that matches the Spectracolor pencils.

In application, the Watercolor cores feel similar to their traditional Spectracolor sisters – very soft and waxy. A bit softer than vintage Sanford Prismacolor watercolor pencils, they are not as soft as contemporary Caran d’Ache Museum Aquarelles (still the softest water-soluble colored pencils I’ve used). The Watercolors have a high level of pigment – on the same level as the vintage Prismacolors and contemporary Caran d’Ache Supracolors – but not as high as Museum Aquarelles. They have much stronger pigment than Caran d’Ache Prismalo pencils of around the same vintage, which surprises me a bit, since the Swiss company invented water-soluble colored pencils. What a coup for a US-made watercolor pencil to be of higher quality!

In my sketch of the pears made with three primary hues only, it was easy to apply multiple layers of dry-wet-dry pigment and develop intense hues. I’m guessing that Design Watercolor Pencils were the best of their kind in their day. I’d love to grab a larger set – I’ve seen photos indicating that they had been available in sets as large as 48 colors – but given my searches so far, these pencils are as common as unicorn teeth.

No matter. I’m happy to use and enjoy these lovely pencils that I do have, thanks to my very generous reader. 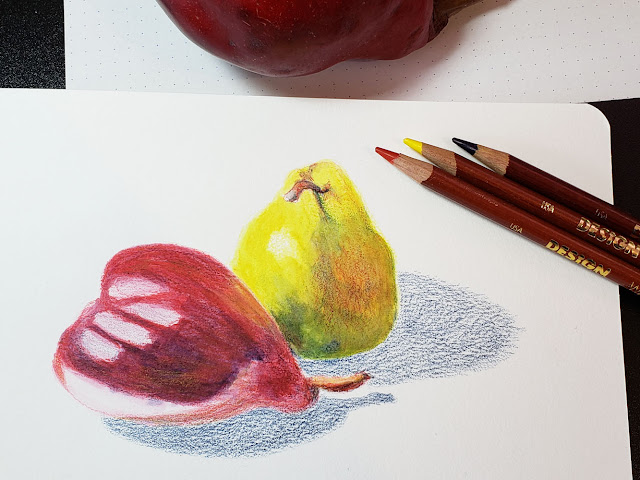