Sometimes you don’t know a grail exists until you find it.

My penchant for colored pencils is obvious. Within that niche, however, I also have a more specialized proclivity: bicolor pencils. It’s possible that this affection began way back in early childhood, when one of the first colored pencils I can remember using was the Empire Sunset Dual-Kolor. Since then, I’ve had difficulty resisting pencils with a different color on each end, even though I know I’ll probably be disappointed. Most of them are novelties or intended for children, and the cores are hard, wimpy and generally unusable (I’ve found a couple of exceptions that I’ll review some day). Lately I’ve seen some that are marketed to coloring book users, which I had hoped might mean they are of a slightly better quality, but more often than not, they are kids’ pencils packaged for adults.

Even without sentimental nostalgia, bicolors make so much sense for urban sketching: On location, I don’t need a large quantity of any single color, but I’d like to have a variety of colors that I can carry in a compact space. For this reason, a high-quality (and ideally water-soluble) bicolor pencil remains on my sketch material wish list.

That brings me to the grail I didn’t know existed. A while back I was chatting with Ana Reinert about vintage colored pencils, and she mentioned a line called Design Spectracolor that at some point was acquired by Prismacolor. Cosmetically, the line is unique in that both the outer barrel and the wood are black. The glossy end cap indicates the core color. Digging around on eBay revealed that Faber-Castell’s name is stamped on at least some iterations of the brand.

Further research revealed that at some point the Spectracolor brand, which was marketed as artist quality, was also owned by Venus (which was eventually taken over by Faber-Castell). These look similar to vintage and contemporary Prismacolors; instead of a black barrel, they have a glossy colored barrel unfinished on both ends, and the wood is natural instead of black. All of these Spectracolors can be found on eBay regularly, but at relatively high prices. I’ve grabbed a few used ones through lot sales and in small, incomplete sets. In core quality, they are like the old Prismacolors: soft and waxy with strong pigmentation.

All of that is intellectually interesting to a colored pencil historian, of course. But one day on eBay, something extraordinary appeared in my search: A complete set of barely used Design Spectracolor Doublecolor pencils! These bicolor pencils bore the artist-quality Spectracolor brand – as well as the Eberhard Faber name, no less! (According to The Pencil Perfect, Eberhard Faber was purchased by Faber-Castell in 1987.) The set included 30 colors (15 pencils), which isn’t a huge range but is certainly adequate for most subjects. It meant that at one time in pencil history, a major American pencil manufacturer saw a market for bicolor pencils for artists – not just kids. 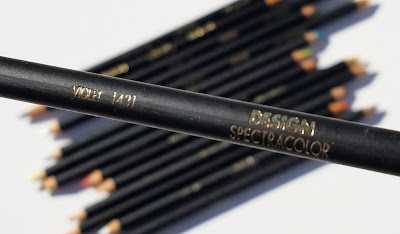 Now my interest was emotional as well as intellectual, and I bid aggressively. (Well, aggressively for me means I placed more than two bids without exceeding my maximum bid limit.) I thought surely some other bicolor-nostalgic, colored pencil historian and vintage collector would outbid me – but I had only one competitor, and he/she dropped out before the end! An easy win!

The Spectracolor Doublecolor pencils have the same cores as their single-color counterparts – very soft, somewhat waxy and richly pigmented. Information on the box says that the pigments are lightfast and fade-resistant. Easy to blend and layer, they are a joy to use. With neither a colored end cap nor a colored barrel, only the points indicate the color. But that’s a minor quibble about the first truly useable set of bicolor pencils I’ve found.

Of course, they aren’t the ultimate grail – to fulfill all my desires, they’d have to be water-soluble, too – but I’m thrilled to have found them anyway. It gives me hope that someday another forward-thinking pencil manufacturer will see this need and fill it.

P.S. Initially I had been numbering the posts in this series about vintage colored pencils because I thought I would have only a few to review. But it seems my collection is growing indefinitely (how did that happen?), so there’s no point in numbering them further!