During the iffy-weather season (and by that I mean September through June), USk Seattle must have a contingency plan for any outdoor event. In August when we planned yesterday’s outing to Woodland Park Zoo’s Rose Garden, it was so warm and sunny that we thought we’d still have a good chance of dry weather by mid-September. Our contingency plan was optimism.

Looking out the window at the downpour as I got ready to leave for Woodland Park, I wondered if I would be standing at the meeting point alone. Only three other sketchers joined me, and we applauded ourselves for being hardcore urban sketchers! Luckily, it was barely sprinkling by then, and in between intermittent spitting, the sun came out! And a little later, many other sketchers joined us. 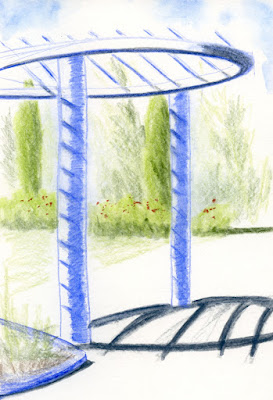 Although most of the roses were past their prime, the garden was still full of color from late-blooming flowers as well as trees just beginning to turn. (Trivia from the zoo’s website: Spent flowers from the pesticide-free garden are fed to zoo animals, especially the gorillas, who love floral snacks.) The topiary, bushes and lawn were lush and bright green from the recent rain – something we haven’t seen in months. After all that heat and wildfire smoke, it finally felt “normal” again.


A few weeks ago when my Drawing Nature class met at this same garden, I was intrigued by the fanciful topiary. It was fun tackling one of the funky trees with charcoal, but in the back of my mind, I fully intended to sketch one again sometime in color. I went out to the middle of the garden so that I could place the gazebo in the same composition.

After strolling around a while to admire the well-tended plantings, I walked through the Sensory Garden, which features bells and chimes that can be played, an artificial hill, and other interactive exhibits. I liked the composition of the bright blue poles and slender trees behind them.

Yay for sketchers who scoff at a little rain! 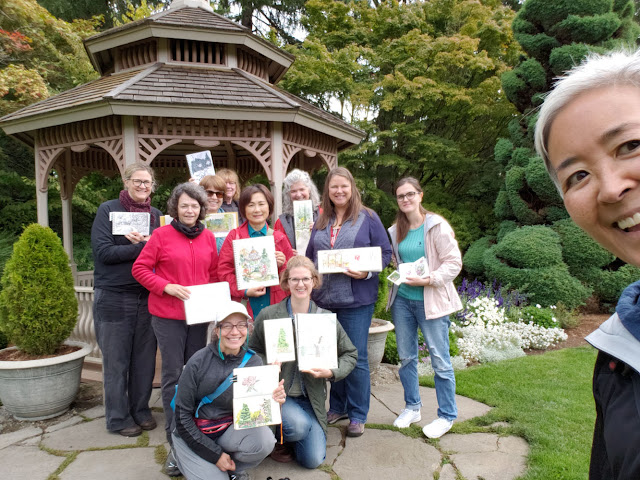