Good Shepherd Center, which is on the National Historic Register, used to be a place of shelter and education for young women in need. After 60 years of such service, it was supposed to be turned into a shopping mall in 1975 until Wallingford neighborhood residents defeated that proposal. Thankfully, the nonprofit organization Historic Seattle took over management of this Seattle Landmark building, which now hosts a variety of community events.

Michele has a project there, so I tagged along. The historic property is a beautiful building. I sketched one corner of it with an unusual window arrangement.

Built around the Center is Meridian Park, which is noted for being pesticide-free. The park is home to a century-old apple orchard (apparently that’s where those young women worked). At this time of year, the trees are shrouded with netting to protect them from bugs. I wanted to sketch a wider composition showing more than one of these trees, but the day was the first truly hot one of the year (84 was the high I saw on my phone), so I settled for one tree that I could see easily from the shade.

I may complain about the heat, but make no mistake: Summer is here – on the calendar and in Seattle (which don’t always coincide) – and I’m thrilled! 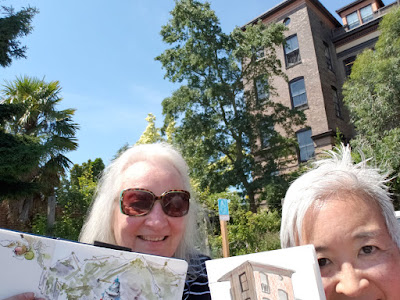