At least in the US, the Kitaboshi name isn’t quite as well-known or as popular as Mitsubishi or Tombow among Japanese pencils, but the few Kitaboshi pencils I’ve tried contain excellent graphite. When the Kitaboshi Art Set crossed my Amazon radar one day, I wagered that the pencils would be worth using.

The set of 12 comes in a typical hinged tin box (with a barcode unattractively placed right on the lid). The grade range is 4H through 6B, which is an ideal drawing range; I can’t imagine needing any grades outside of it. (Yes, yes – I know I own the full 22-grade set of Mitsubishi Hi-Uni graphite pencils, but that’s beside the point.)

A delightful cedar scent wafted from the box when I opened it. Elegant yet unpretentious, the unpainted, lightly varnished, semi-hex barrels display a lovely natural wood grain.

In addition to appearing on three facets, the grade is also printed in silver on the glossy black end cap. This is a small but enormously helpful detail for those of us who prefer to store our pencils in cups and in our everyday-carry bags rather than in flat tins. I wish more graded pencils offered this feature. (Please ignore the apparent white eyelashes on the end caps… those are reflections of our deck railing.) 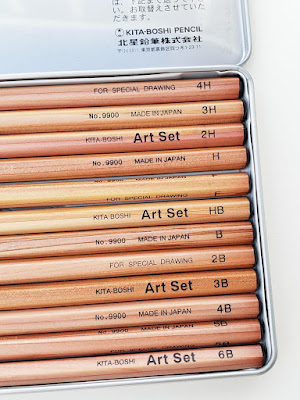 Now for the important part. First I swatched all the grades, and as I’d hoped, the graphite is smooth and consistent.

I then compared the Kitaboshis grade-for-grade against my all-time favorite Mitsubishi Hi-Uni drawing pencils. In each case, the Kitaboshi was slightly darker than the Hi-Uni of the same grade. It also felt very slightly less smooth. (Would I be able to tell the difference with my eyes closed? I’m not sure.)

Finally, I made one more swatch comparison – purely as geek research. Palomino Blackwing pencils, while headquartered in California, are manufactured in Japan. If you hang out in the pencil community as I do, you may have heard the speculation that the unnamed Japanese manufacturer of Blackwings is Kitaboshi. Annoyingly, Blackwings are not graded – instead, they retain the general core descriptors extra firm, firm, balanced and soft – so it’s an ongoing topic of discussion to figure out which grades the four core designations are comparable to. Without confirming or denying the Kitaboshi conspiracy theory, I thought it would be interesting to compare each standard core to a few Kitaboshi grades.

The extra-firm Natural edition seemed closest to a Kitaboshi 2B, or perhaps between a 2B and B. The softest core (nicknamed “MMX”) seemed like a 4B, which is exactly how I think of it when I use it to draw with. I tried to grade the firm 602 and “balanced” Pearl too, but frankly, they seem so similar to each other that it was like splitting hairs. Somewhere around 2B or 3B, I suppose.

What turned out to be more interesting than trying to grade the Blackwings was realizing how similar they feel to Kitaboshis, grade for grade. (Is the speculation true? Is Kitaboshi the poor sketcher’s Blackwing? You decide.)

The final test, of course, is a sketch, and the Kitaboshi Art Set pencils are delightful to use. For this sketch, I used grades H, HB and 4B in a Stillman & Birn Epsilon sketchbook. Although they may be just a tiny smidge coarser than my beloved Hi-Unis, the natural finish is so pleasant to hold and touch (and smell!) that the Kitaboshis are a very strong contender. In fact, they earn bonus points for graded end caps and a reasonable price.