A Weekend of Portraiture with Gary Faigin

“If you want to learn to draw portraits, the worst thing you can do is to practice by drawing from photographs.” That’s how strongly Gary Faigin believes in the value of learning by drawing from life. In one weekend at Gage Academy, I got a crash course in Faigin’s basic portrait-drawing principles. Co-founder and artistic director of Gage, Faigin rarely teaches outside of his atelier, so when I saw that he was offering a weekend intensive on portraiture, I jumped right on it.

His assertion about the value of drawing from life made me feel somewhat vindicated about not enjoying drawing anything from photos (his statement felt like a spiritual high-five to all urban sketchers). As a learning tool, he said, drawing from a photo is about 10 percent as effective as drawing a model. Copying a master is about 50 percent as effective. But drawing in your sketchbook every time you see someone’s face? That’s 100 percent effective – even if it’s just a quick sketch. Every time you do one, you learn something. Faigin urged students to draw heads from life at every opportunity. (He estimates that he’s drawn 10,000 heads by now!)

Over the weekend, we had two models each day – one in the morning, one in the afternoon – giving us a variety of head types and features to practice on. We also systematically rotated our spots in the studio when the model changed so that each student would learn to draw the head from different angles – near profile, three-quarter and full-frontal face. 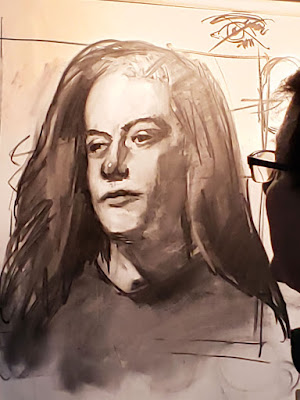 Besides the actual drawing practice, probably the single-most valuable part of the workshop was watching Faigin’s demos. Seeing him turn big, ugly blobs of charcoal into a face that closely resembled the model – in only 30 minutes or so – was nearly magical. But of course, it’s not magic – it’s simply applying the principles that he has developed over 40 years as an artist and teacher.

Faigin’s principles are based on his belief that portrait resemblance comes not from individual features but from the larger structures: overall head shape; positions (not details) of major facial features; and relative proportions of those features. If we block in those larger structures correctly, then even if we don’t render the eye or mouth perfectly, the portrait will still be recognizable. And if those larger structures are not blocked in correctly, no amount of perfect rendering of individual features will lead to resemblance. These are the steps that he showed us with each demo and that we practiced all weekend:
His method is designed to bypass the human instinct to first pay attention to individual features. Paradoxically, although we (as humans) are attracted to details such as individual features, our brains recognize faces by their larger shapes. Surprisingly, he believes that by following these steps, one can achieve reasonably recognizable results after practicing only about 20 or 30 portraits. (I was afraid he was going to say 10,000!) In fact, he says portraiture is relatively easy compared to figure drawing, which involves so many more ways in which proportions can go wrong.

My biggest insight of the weekend was how similar Faigin’s approach to portraits is to the urban sketching methods I learned from Eduardo Bajzek in Porto. Although buildings and streets seem very different from faces, the principles for drawing them are identical: Block in the largest shapes and structures first. Once you are confident that the large shapes are right, including their relative positions and values, then filling in the details is easy.

One other similarity was both artists’ penchant for use of the eraser as a drawing tool. In Eduardo’s workshop, we spent a substantial length of time giving the paper an even tone of gray with graphite so that highlights could be put in with an eraser. Faigin followed the same technique with charcoal. (Important: In Faigin’s workshop, we used a very smooth “layout” paper with a surface similar to standard printer paper. With his technique, he advised against using traditional charcoal paper, which has a strong tooth that holds charcoal particles and will not erase cleanly.) Over the weekend, it helped significantly to already be familiar with Eduardo’s technique that I’ve been practicing with graphite.