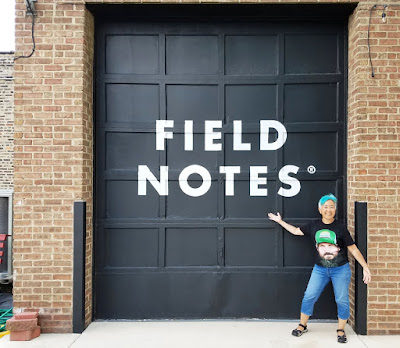 A few years ago when I was trying to find a small, easily accessible notebook to serve as a sketchbook supplement, I accumulated a mountain of them from many manufacturers, trying to find one with paper that would suit the media I like to use. Of course, small notebooks aren’t sketchbooks, so the paper in them usually isn’t appropriate for what I want to do. Endlessly frustrated, I resorted to making my own. But my handmade booklets were nothing more than a smaller version of my conventional sketchbook, and what filled them were nothing more than smaller versions of my usual sketches.

Fast-forward to Spring of last year when something happened: Field Notes Brand released its Sweet Tooth edition – identical in size and format to all of its previous editions (and similar to the mountain I had tried from other manufacturers) – except for one thing: The books contained bright red, blue and yellow paper!

Even though I still fill my conventional sketchbook at the same pace, I look for different types of subject matter to sketch in my favorite red book. Instead of the “stories” I try to tell with urban sketches, my Sweet Tooth is filled with random bus riders, motorcycles parked on the street, the beer I drink with dinner, and other small moments of my day. I won’t be so dramatic as to say this little book changed my life, but it did change the way I look at sketching. Why is red paper so very different from white? I don’t know, but somehow it gives me a different perspective. (I don’t post many of them here on my blog, but you can see all the sketches made in Field Notes in my Flickr photostream.)

With that as preamble, perhaps you’ll understand why I couldn’t leave Chicago without making a pilgrimage to Field Notes headquarters. True, I’m a stationery geek anyway, so it seems only natural that I would visit the company while I was in town for the Urban Sketchers Symposium. But it’s not every day that an ephemeral paper notebook changes one’s perspective. For that, it was worth taking the short Blue Line ride to pay my respects to the notebook maker (I even wore my T-shirt sporting the face of Aaron Draplin, Field Notes co-founder and designer!). And to make it even more fun, I gathered up a bunch of local Field Nuts to go with me.

We were given a gracious welcome and facility tour by Bryan Bedell, who told us all about Field Notes Brand’s history. We all peeked into boxes and shelves and bought more notebooks than we really needed (and received a free Chicago book and other goodies!). I sketched the water tower on the roof of the building next door. Pilgrimage completed, I left Chicago the next day, happy that I’d visited the home of my little red notebook.

Edited to add the photo below of the gifts I received. The lefty books were my only purchase. . . I already had all the other standard editions!