About two years ago, my brother Frank, a photographer and astronomy buff, started talking about the total solar eclipse of 2017. The last time a solar eclipse crossed the United States was in 1918, and the last time it passed over even a part of the country was in 1979. This one was going to be a big deal.

Totality would be visible in central Oregon as the eclipse made its southeastern path across the U.S. Since most of my family lives on the west coast from Seattle to L.A., it made sense to plan a family reunion around Aug. 21, 2017. I was in!

A year before the event, we found a house to rent in Newberg, Ore., large enough to accommodate the dozen of us. Although Newberg wasn’t on the path of totality, McMinnville was – a town only a 20-minute drive away. My brother Richard approached friends in McMinnville to ask if we could view the eclipse from their property. Our eclipse reunion plan was set.

Several weeks prior to Aug. 21, the media began speculating that the eclipse could cause the biggest traffic mess in U.S. history. In Oregon, the longest period of totality (two minutes) would pass over the tiny town of Madras, where a million people were predicted to show up. Traffic would be jammed all around the area for days approaching the eclipse. Armageddon! An apoc-eclipse! (You can see why the media loved this.) Initially I ignored the hype, especially because our viewing location was on the very fringe of the totality zone, so it would not be considered a prime area.

Days before we were to leave for Oregon, however, I started getting seriously antsy. What if we really did get trapped on the highway for hours trying to reach the eclipse zone? As someone who avoids crowds of any kind – even “normal” events, like music festivals or shopping on Black Friday – I started wondering if I should just stay home. Was it stupid to join this insanity? With much trepidation the day before the eclipse, I got in the car at 4 a.m. for a three-and-a-half-hour drive. I figured the earlier we hit the road, the better our chances of avoiding the worst of the traffic.

We had the highway to ourselves.

At the rental house with my family, we planned for the next morning’s drive to our viewing site in McMinnville, which should take no more than 30 minutes under normal conditions. Some thought allowing an hour would be sufficient, but we agreed to leave at 7 a.m., which would give us a comfortable two-hour cushion for arriving in time for the beginning of the eclipse at around 9. I seemed to be the only one concerned about the coming Armageddon, so I volunteered to get up at 3 a.m. to check the traffic report on Google. I checked then, and checked again at 5 a.m. Google said everything was normal. We left the house at 7 a.m. as we had agreed.

We arrived in 30 minutes.

Instead of the apoc-eclipse, we passed the time pleasantly in our friends’ lovely garden eating home-grown blueberries, waiting for the solar event to begin. The morning was warm; the sky crystal clear.

I decided I would make one sketch of us viewing, and I also wanted to make a series of small drawings to show the moon obscuring more and more of the sun. Mostly, though, I wanted to simply experience my first total solar eclipse. Although the entire eclipse would take about two hours, I knew totality would be very brief, and I wanted to give it my full attention.

After a build-up of more than an hour (or technically a couple of years), the tension in the group was palpable. Darkness began to fall, and it became cool enough that I had to put my hoodie on. At 10:18 a.m., totality was achieved, darkness suddenly fell, and it was one of the most wondrous sights I have ever experienced. We all pulled off the protective glasses we had been wearing previously and viewed the blackened sun and its shimmering corona with our naked eyes. Around us it was dark, yet not the same kind of darkness as night. The horizon looked similar to sunset, yet again, not quite the same. It was an unearthly, eerie, utterly unique light.

In much less than a minute (15 seconds? 10?), totality was over. The “diamond” on the ring suddenly broke through, and then we all scrambled to replace our protective glasses to continue viewing the sun, once again too bright to look at directly.

It was a special moment, and I’m thrilled I experienced it with my family. I’m also very happy that I didn’t let my fear of what might happen keep me from it.


Later that day as I was looking out over the Willamette Valley, famous for wine grapes, I had renewed respect for the sun. Every day it comes up and goes back down, and we all take it for granted most of the time. For a couple of hours, millions of people were intensely focused on that sun, no longer taking it for granted, and I felt strongly part of that collective awe and wonder. For a few seconds, I could look directly at it with unprotected eyes, possibly for the only time in my life. I felt very small and yet complete, surrendering to its indifference.


My nephew-in-law Mark made a short video at the moment of totality – not of the sun but of the strange darkness as it fell over us. The audio accompanying the video probably describes the moment we experienced better than these words in my blog post. See the video on Mark’s Instagram. 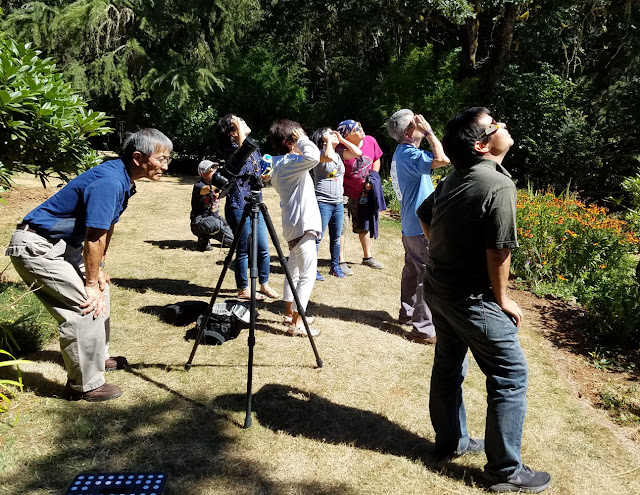 Posted by MiataGrrl at 8:43 AM