Most colored pencil lines are sold in sets – each set offering a full palette and with successively larger sets (24, 36, 120, etc.) containing more shades and tints. Blick Studio offers such full-range sets as well as a few themes.

Spectrum Noir ColourBlend and its water-soluble counterpart, AquaBlend, are unusual in that all sets are sold by themes only – Naturals, Florals, Primaries, Essentials and Shades & Tones. Depending on the subject matter of your work, these themed sets can be useful or not. If you sketch a wide variety of subjects and want a wide-ranging palette, then these themes might be annoying, as you might have to purchase more pencils than you really want. But if you mainly sketch outdoors and rarely need bright hues, then a box of Natural colors might work out fine. Since my class focus was landscapes, I decided to try a Natural set of ColourBlend pencils to see what this brand was like.

According to the box, the Spectrum Noir collection is made in the UK. All the pencil barrels have the same maroon finish with a lacquered, dipped end to indicate the core color.

Like water-soluble AquaBlends (which I included in my comparison review of water-soluble colored pencils last year), ColourBlend pencils are very soft and creamy in application. They crumble a bit more than the other pencils tested in this series, but not to the point of being a nuisance.

Rich and vibrant hues blend easily, and in my apple sketch, the pigments covered the Alpha paper’s grain relatively well. A wax and oil hybrid, ColourBlend pencils are just about as soft as Caran d’Ache Luminance and have similar crayon-like properties, such as a waxy glossiness after several layers are applied.

As expected from a very soft pencil, again like Luminance, ColourBlend cannot retain a point for long, so drawing fine details is difficult. Very unlike Luminance, however, ColourBlend pencils occasionally have scratchy spots in the cores that can leave unblended streaks in the pencil strokes (a flaw I also encountered in Blick Studio pencils).

Ability to erase was about the same as most other pencils in this review series (except Luminance, which was worse) – about half the pigment remained on the paper after erasing without damaging the paper’s surface.

After using some ColourBlends for a class assignment, I liked their softness and rich hues enough that I decided to get a box of the Primaries set to round out the palette with some reds and blues (mostly missing from the Naturals set, which has a large selection of greens). A few colors in each set are very nearly duplicates of the other set. They have different names, but the hues are close enough to be difficult to distinguish. I’m assuming that might be the case among the other themed sets, too. 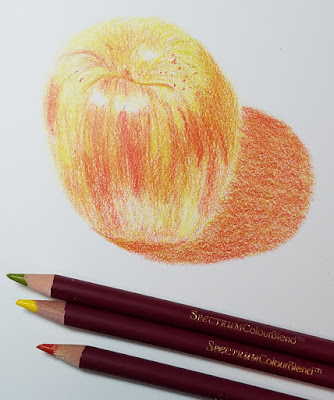 I consider these to be very good pencils (though with the same drawbacks of other soft cores), and the price per pencil based on the sets is within the lower range. However, a major issue is that ColourBlends are not available open stock, at least at all my usual online retail stores (nor are they available in any form at my local walk-in stores). On principle, I can’t recommend colored pencils that aren’t available open stock, no matter how much I like them, because naturally some colors get used more than others, and when they’re gone, they can’t be replaced individually. But the ColourBlends are similar enough to Luminance in softness, and the palette I have is different enough, that I can use them as an extension to Luminance’s relatively limited palette.
Posted by MiataGrrl at 7:01 AM