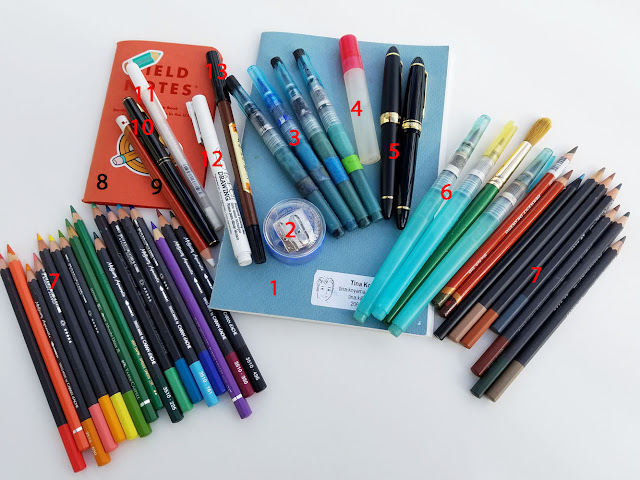 OK, so the update is not radical in terms of time – it’s not as if I suddenly changed out everything in one day. I’ve been making gradual, incremental changes all along. But two major changes are significant (though perhaps only temporary), and I’ve made them both since I returned from my trip to the UK: For the first time in a few years, I’m using only two fountain pens. And for the first time ever, I’m using no watercolors at all!

I’ve been gradually using colored pencils more and more often, especially during travel, yet I felt like I always “needed” watercolors, just in case. I finally decided to cut the cord and take the watercolors out. (I even removed the few Zig Clean Color Real Brush markers I usually carry.) So pencils are now my only source of color (except for one waterbrush filled with sky-blue ink). As usual, it’s an experiment, and I might eventually put watercolors back in. We’ll see if I miss them.

As for the fountain pens. . . you know how much I love them. But I found that when I carried five or six or eight in my bag, I used them according to the 80/20 rule: My two Sailor fude pens got used 80 (or maybe 90) percent of the time, while all the rest got used only occasionally, meaning they were not earning their keep as daily carries.

Here’s what’s in my bag now:

While I was working on that page, I decided to update the photo for my ultra minimalist sketch kit, too (the kit I would take to Gilligan’s Island). I use this tiny Travelon bag to hold my phone, wallet and keys while taking fitness walks around Green Lake. I rarely sketch on those walks, but every now and then I spot a heron or ducklings that I can’t resist. It still contains a Pilot Petit1 fountain pen. I swapped out a handmade sketchbooklet for a red Field Notes, which is an easy favorite for small, quick sketches, plus a brush pen and a white Gelly Roll.