Riding the bus into town yesterday morning to meet Urban Sketchers Seattle at the Olympic Sculpture Park, I swore I would sketch something different this time. I’ve sketched at the park at least three times with USk in as many years (twice in 2014, in fact, and once in 2013), and somehow I managed to sketch Alexander Calder’s Eagle every time. But darn it if I found myself magnetically drawn to it again. No wonder, I suppose – it’s arguably the most visually compelling piece there.

I’m not the only one who thought so: Of the seven sketchers who stayed for the sketchbook sharing, six of us had sketched the Eagle!

At least I sketched one thing at the park that I haven’t sketched before: A fashion photography shoot in front of Seattle Cloud Cover, the colored glass wall on one side of a pedestrian walkway. 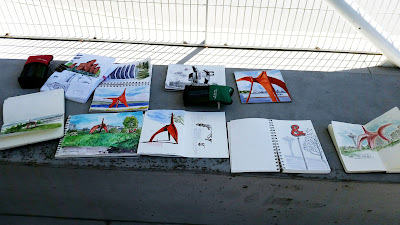