Rocket, But No Saturn

Despite last night’s downpour and the early morning’s drizzle, Urban Sketchers Seattle’s outing to the Fremont neighborhood stayed dry and downright pleasant! After our initial meetup in front of Lenin’s statue, I didn’t have to go very far for my first sketch: the tiny Kwanjai Thai Cuisine on North 36th Street. You’ll probably guess that it wasn’t the café, as cute as it is, that caught my eye – it was those humongous high-tension power line towers behind it. It’s hard to sketch in Fremont without capturing at least a glimpse of them.

By now I’ve sketched many things Fremont is known for – the topiary dinosaurs, the infamous statue of Lenin, the Solstice Parade’s nude bicyclists – but one I hadn’t yet checked off my list is the Rocket, and another is the planet Saturn atop its namesake building across the street. I circled the block twice, often walking backwards, trying to find a way to get both the Rocket and Saturn in the same sketch. Somehow there was always a tree, a building or just a clumsy composition keeping me from what I wanted. I finally settled on the Rocket alone, but I know there must be an angle I missed. Next time I’ll catch them both.

We had a great turnout on this weather-iffy day, including four sketchers joining us for the first time! 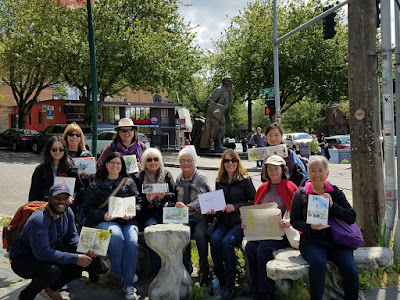 Posted by MiataGrrl at 4:18 PM