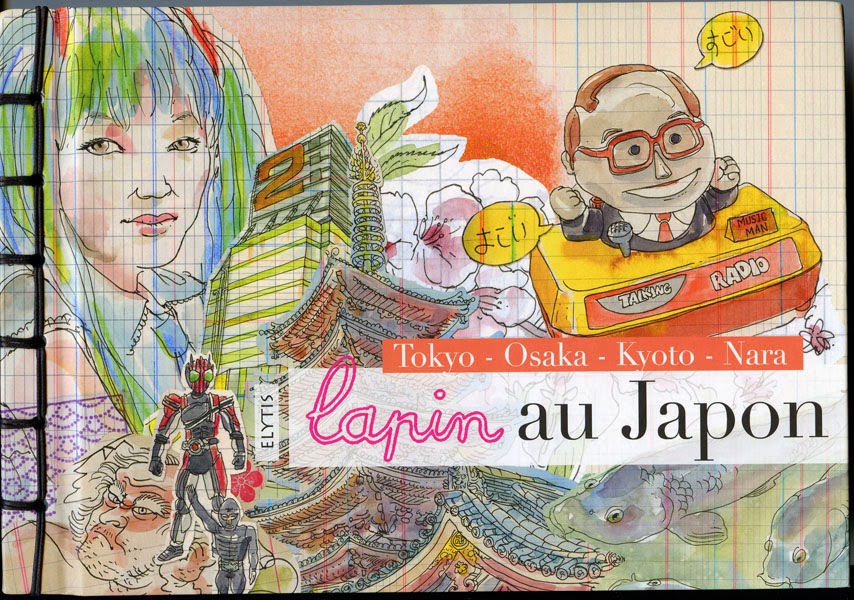 As a Japanophile as well as a huge fan of urban sketcher Lapin, it was impossible for me to resist asking Santa for a copy of Lapin’s latest book, Lapin au Japon. Although it is listed as a paperback on Amazon, it’s actually a hardbound book bound with a traditional Japanese stab binding! The oversized book contains more than 200 pages (I’m estimating; the pages aren’t numbered) of Lapin’s charming sketches made in Tokyo, Osaka, Kyoto and Nara during a 2010 trip. The pages are all enlarged reproductions of the vintage ledger book pages he prefers to sketch on. In addition to hundreds of his sometimes comical, sometimes elegant drawings, the book includes some photos of Lapin and his sketch subjects and stamps and stickers he collected during his travels. Looking through the book feels very much like he has shared his actual travel sketchbooks with me.

Unfortunately, since I can’t read French, I’m not privy to his surely keen (and probably amused?) personal observations about Japanese people, places and culture written in the margins. As an astute reader of sketches, however, I laughed out loud in several places where reading the notes is not necessary to catch the humor and insight. For example, in one sketch of a meal on skewers (based on things I saw being eaten in Japan, I’m guessing they were animal parts of undetermined source), he shows side illustrations of what he imagines they might be (or might as well be) – a human heart, tongue, eyeballs, etc.! I also can’t read much Japanese, but I did catch a few words and phrases Lapin apparently learned on his journey (or copied accurately from signage).

Although Lapin, a Frenchman now living in Barcelona, is known for his urban sketches, he is also a sensitive portraitist capturing numerous Japanese citizens (including colorful harajuku girls) who must have been delighted to sit for him in exchange for the honor of appearing in his sketchbook. (Many of the portraits are signed by the sitters.) Of course, he also includes many “candid” sketches of sleepy commuters, restaurant patrons and others he encountered in true urban sketcher fashion.

Lapin au Japon is the kind of travel sketchbook I aspire to keep whenever I travel – not so much a record or documentation of the trip as a collection of personal, idiosyncratic visual observations, both large and small. While I do fill my travel sketchbooks with the types of urban sketches I would capture at home, I tend to neglect the smaller details that make up the vast majority of the enjoyable moments of discovery when traveling in an unfamiliar country. For example, Lapin’s sketch of a tray of condiments (including a tiny self-portrait as reflected in a shiny surface): it’s the kind of thing that brings back memories of many tasty (or not!) meals. I’m inspired to emulate that level of detail in my next travel sketchbook.
Posted by MiataGrrl at 4:46 PM