Dibble Intersection (Plus Paper and Pinks)

Dibble Avenue Northwest in Crown Hill is a regular stop on my annual petal-peeping tour. Narrower and tightly packed with parked cars on both sides, the street is a bit more challenging to sketch from my mobile studio than other favorite spots. I would prefer to stand on the sidewalk, but they are narrow too, so I didn’t feel comfortable taking up pedestrian space.

As luck would have it, I found a parking spot on the “wrong” side of the street facing this traffic circle at the foot of the block lined with cherry trees. Almost as much as the cherries, the small, crooked bush caught my eye. Surrounded by daffodils, backlit by the early afternoon sun, it was a beacon of spring cheerfulness. (I sketched the same intersection from the sidewalk in 2016. That sketch was made on March 17, a full three weeks earlier in the season than this one, confirming that the cherries were late in blooming this year as I had suspected.)


Technical notes: I tried a new paper with this sketch: Legion Stonehenge White, which is one of the samples I tried when I reviewed the Legion sample pack for the Well-Appointed Desk. (I bought a 9-by-12-inch pad of it and stitched a few sheets into a signature, just like I used to do when I bound my sketchbooks regularly.) Its weight is 90 pound, so I was concerned about how well it would hold up to my spritzing technique. It buckled, but not intolerably; its 100 percent cotton content probably kept it from buckling even worse (as 98-pound Canson XL mixed media paper does). Even Stillman & Birn Beta, which is 180 pound, curls a bit. I haven’t sketched on the opposite side of this Stonehenge page yet, though, and that’s usually when buckling bothers me, so we’ll see how it is next time.

What really makes this Stonehenge paper distinctive, from my perspective, is its texture. Apparently a favorite of printmakers, the tooth is lighter than typical cold press papers and S&B Beta but heavier than hot press, which makes it a joy to use with colored pencils.


Which brings me to . . . pink pencils. Every spring, I add a couple of pink watercolor pencils to my bag. To my constant dismay, the Caran d’Ache Museum Aquarelle collection does not include a cherry blossom pink (the closest is 571, Anthraquinoid Pink, which is coral, not pink). I usually choose the relatively cool Cd’A Supracolor Light Purple (091) and then add a second pink to scramble with it (“scrambling” is a technical term referring to the use of two pencil colors together without blending them; yes, I just made that up). This year my second color is a vintage Sanford Prismacolor watercolor pencil in Pink (WC2929), which is slightly warmer than the Supracolor. 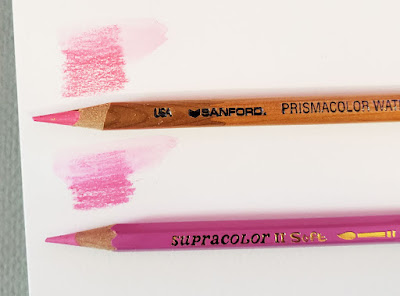 (Geek note: This natural-barrel Sanford is probably younger than the vintage set with colored barrels shown in my review. But this pink one was still made in the USA, so it was probably from the end of Sanford’s era. Contemporary Prismacolor watercolor pencils still have natural barrels like this, but they are no longer USA-made nor Sanford-branded.)
Posted by MiataGrrl at 7:00 AM