Melanie Reim’s portion of the Dancing Lines workshop focused on sketching people in the urban landscape – individually and in large crowds. With many years of teaching experience at New York City’s Fashion Institute of Technology, Melanie shared not only her personal experience with urban and reportage sketching but also her vast knowledge of drawing the human figure. All her storytelling through drawing is based strongly on composition (what she calls design) – enabling the story to be told through the emphasis you place on one element or another in the design of the picture. For example, the same scene can be sketched with an emphasis on the background or on a group of people or one person, depending on the composition, and each sketch will tell a different story.

During my group’s afternoon session on the first workshop day, Melanie walked us through the handouts she had sent in advance on creating thumbnails, the basics of human torso anatomy, tips on drawing a crowd of people, and looking at calligraphic strokes from different written languages as inspiration for describing figure gestures. She also talked briefly about some of her favorite drawing tools. 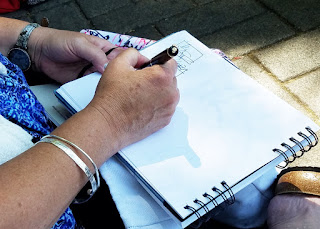 In the warm sunshine next to the Seattle Center’s fountain, we first practiced making at least 10 thumbnails in 10 minutes while thinking in terms of storytelling and “design.”
Then we picked one thumbnail to turn into a sketch. I used my favorite brush pen to sketch the rigid, triangular shapes formed by the roof and supports of the KeyArena building and the more organic shapes of clusters of trees on either side of it. (By the way, the “story” that Melanie refers to doesn’t have to be a big drama; in this case, the interesting contrast of shapes in my sketch is all there is to my “story.”)

Next we turned our attention to figure drawing, which is Melanie’s primary interest. Focusing on individuals first and eventually groups, we were to look at “body language” so that our drawings became unique individuals and not generic. She especially emphasized avoiding drawing around the contour and instead looking at each major muscle area of the body – torso, upper leg, lower leg, etc. – as a three-dimensional box to better describe the body’s form. She always starts with the curve of the spine to define the pose and identify where the weight is, and as she demonstrated this concept, I was very much reminded of Suhita Shirodkar’s “line of action.”

In my series of small studies, see the arrow in the bottom row (above)? That’s where Melanie made a small correction to my figure. She said the guy’s shoulder angle and the way his hips were turned indicated that his right leg should be slightly closer to me, and therefore the right foot should appear slightly lower than the left. I was astounded that such a small correction made a big difference in making the gesture look “right.” I’ve learned these very principles in life drawing classes, and I try to practice them whenever I go to life drawing sessions, yet I was still astounded to see how small differences matter greatly.

The last exercise of the day was to combine figures with a background (above). Most participants chose the fountain as a central focal point. I inadvertently developed a way to shade the figures that looks very similar to the scumbling we had done with a stencil brush in KK’s session. I had been using my favorite Sailor brush pen filled with Platinum Carbon Black so much in the earlier exercises that it started to run dry. I like the charcoal-like look so much that I’m going to start carrying a brush pen that’s running dry just for this kind of shading.

Melanie started out with my group the next morning at the Pike Place Market. At a quiet table in the Atrium, we had an opportunity to hear her talk more about her favorite materials – brush pens, fountain pens, dip pens with long, flexible nibs – as she showed us how she uses them to make expressive, variable lines, which are her trademark.

That quiet didn’t last long, however. It was a sunny summer Sunday at the Market, and we headed straight out into the thick of what was probably the single densest concentration of people in Seattle at that hour. A NYC native, Melanie thrives on sketching crowds!

Our assignments were to draw some individuals and crowds, again focusing on body language, and to look at one individual making repetitive movements (such as all the market vendors serving customers) and draw a series of sketches indicating those movements. For crowds, she suggested seeing them as a single large shape rather than a collection of individuals. These were all very challenging, of course, since the crowds are moving constantly, and I was also in the middle of such crowds.

My favorite from these exercises was my sketch of various audience members watching a piano busker perform. (You can imagine how difficult it was for me to resist sketching the busker himself!) As Melanie suggested, I tried to capture a sense of depth and draw individuals and their body language, not generic people.

The most difficult exercise for me was drawing a series of movements (at right). I chose a donut vendor who was doing three distinct movements repeatedly: Snapping open a paper bag with one hand, reaching for donuts with a pair of tongs with the other hand, and placing the donuts into the bag. I almost immediately gave up on trying to do the whole figure and thought I’d focus on just his arm and hand. But I still never completed the whole series! (I think I did better on a very similar exercise four years ago in Marc Taro Holmes’ workshop at the Barcelona symposium.)

Melanie’s extremely informative portion of the workshop covered much ground in only six hours. I’ve tried to summarize as many of her main points here as I could remember, but I know that to really reinforce and retain the information, I need to use what I learned immediately and keep practicing whenever I can.


Again, many thanks to USk Seattle for bringing KK and Melanie here. It was an inspiring weekend, and now I’m all warmed up for the Chicago symposium next week!

Posted by MiataGrrl at 4:30 PM