Parsons Garden and the garden’s area of upper Queen Anne Hill have been a favorite of USk Seattle for several years; they’ve become a summer staple. I think the first time we met there was on the 4th of July in 2014. Looking back at that post, I see that I sketched two of the same scenes yesterday as I did then – Highland Drive’s romantic curving wall of globe lamps, and the spectacular viewpoint at Kerry Park.

I’ve sketched Highland Drive with a twig, and ink and watercolor more than once, but I’d never used graphite at that location, so I pulled out my Gekkoso 8B. Kate was sketching a short distance up the drive. She started in the shade, but by the time I put her into the sketch, her bright yellow blouse was blazing as bright as the sun.

Kerry Park and its dazzling Space Needle-centered skyline is another view I’ve sketched several times, but it’s never been as crowded as it was yesterday. Entire buses and cars periodically disgorged tourists, who rushed up to snap photos of each other in front of the Needle and Mt. Rainier. Instead of working around people blocking my view, I moved to a particularly popular spot for group photos. As mothers ordered their kids into neat rows and couples pulled out selfie sticks, I felt a bit snarky and wanted to shout, “Sure, it’s lovely today, but you should have been here the prior 10 months like the rest of us! We didn’t get this free – we earned it!”


But I was in such a good mood that I didn’t care. Really, who could blame them when this is what they were looking at: 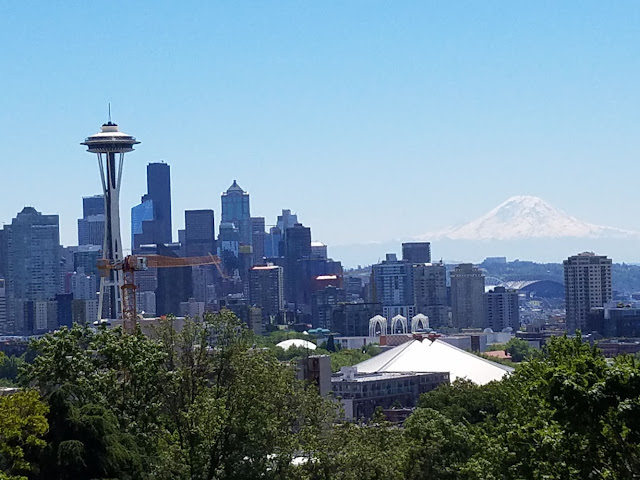