Seawall Construction and the Waterfront

The waterfront is a busy place these days. Construction of the seawall had halted during the busy summer tourist season, but now that the dreary weather is back, so are the big, noisy machines and lots of action. Anne had suggested that the waterfront (if weather permitted) and the ferry terminal building (if it did not) would make the area a good sketch outing for the Friday Urban Sketchers, and indeed it did.

David Hingtgen has some particularly terrific sketches of the seawall construction activity that I was hoping to take a crack at myself from the pedestrian overpass, but this morning’s drizzle was discouraging. Instead, I sheltered under the ferry terminal building’s awning to sketch the overpass itself (with the Alaskan Way viaduct behind it).

Chilled, I ducked into Caffe Apassionnato inside the ferry terminal building. The café’s window-facing table gave me a warm, dry view of CenturyLink Field, Safeco Field and a bright red seawall construction crane. If you look to the far left, you’ll see two yellow cranes from some other project (plus a tall black thing that looked like some kind of pump).

After the group shared its sketches, Kate and I stopped for lunch at Ivar’s fish and chips bar. Due to all the construction, the sculpture of “Ivar Feeding the Gulls” (which I sketched a couple years ago) is temporarily sequestered from the sidewalk with a chain-link fence. Kate was disappointed that she couldn’t sketch Ivar from the front, but we had a full view of the sculpture from the back as we ate lunch.

Of course we both saved some fries for the gulls! 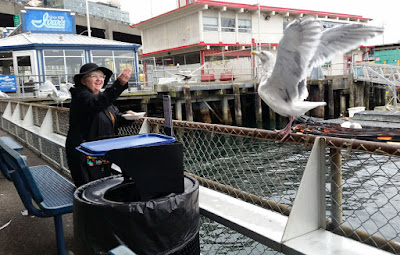 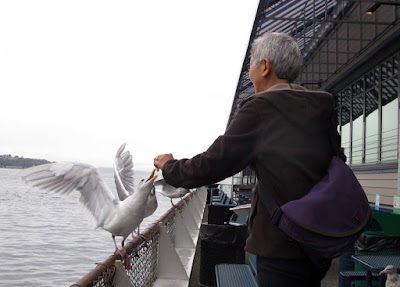 Posted by MiataGrrl at 8:12 PM