New Ideas for My Sketchbook 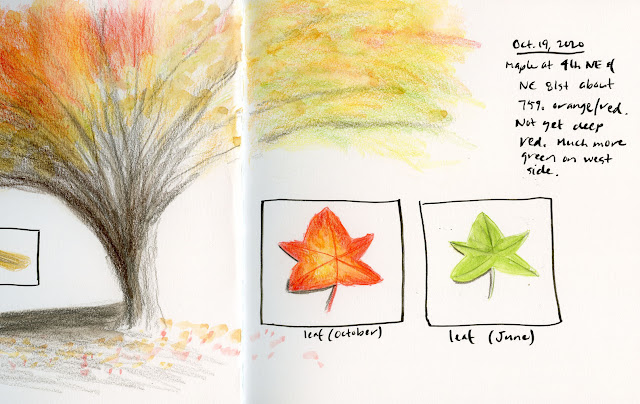 Fall and winter are the seasons when I look forward to taking classes, especially at Gage Academy. This year, almost all Gage classes are online, of course. Since I was not sure what the experience would be like, I chose a half-term course (five weeks) – Sketchbook Techniques & Expression – to see if I would enjoy learning on Zoom. The class is about using the sketchbook as an exploration of a variety of techniques and media.

Since the scope of the class is wide open in terms of what students might want to explore, I gave myself the objective of practicing drawing from memory (and maybe eventually from imagination).

For the first class project, I made a page spread that represented the kind of nature journal I might like to have (above), if I were a nature journaler (though as I’ve said, I’m too lazy to be one). In this “fake nature journal,” I sketched a maple tree from imagination, along with a seed pod and some leaves. It wasn’t too ambitious, but it was a start.

The second class began with a brief warmup exercise in drawing negative space – an exercise I have done many times before in books and other classes. Then, for the longer assignment in using collage (below), I had in mind tearing out the shape of Mt. Rainier from paper based on my memory of sketching her back in July. My intention was to use the silhouette I had torn out, but our earlier exercise in negative space gave me the idea to use the negative part of the torn paper instead, which I liked better.


Instructor Edie Everett had suggested including some writing related to the chosen theme. I had only a few minutes left in the hour we had been given for the assignment, but I started Googling, and almost immediately I hit a beautiful poem about Mt. Rainier by Denise Levertov. Originally from the UK, Levertov lived in Seattle for much of her life (and died here in 1997). The lines I quoted on my collage are the first four, but I’ve included the whole poem here:

I was welcomed here—clear gold
of late summer, of opening autumn,
the dawn eagle sunning himself on the highest tree,
the mountain revealing herself unclouded, her snow
tinted apricot as she looked west,
Tolerant, in her steadfastness, of the restless sun
forever rising and setting.
Now I am given
a taste of the grey foretold by all and sundry,
a grey both heavy and chill. I've boasted I would not care,
I'm London-born. And I won't. I'll dig in,
into my days, having come here to live, not to visit.
Grey is the price
of neighboring with eagles, of knowing
a mountain's vast presence, seen or unseen.

I studied Levertov back in college, and I have long enjoyed her work, but I was not familiar with this poem until I stumbled onto it. It was exactly what my collage needed. I’m also pleased by how accurately I captured Her Majesty’s silhouette from my memory of that beautiful morning at Maple Leaf Park when I sketched her from life.

Compared to life drawing from memory, this exercise was so much easier. Certainly, the silhouette of a mountain is much simpler than an unfamiliar model’s figure, but I’m sure it also helped that I had drawn the mountain several times previously. An image in my memory is much stronger when I have drawn it and not just seen it. That’s a duh moment – it should have been obvious – but I didn’t realize it until I tried it.