Our last stop in the Netherlands before returning home was Delft. An hour south of Amsterdam by train, Vermeer’s quiet hometown was the ideal way to decompress after the symposium high, and cool down – literally. After Amsterdam’s swelter, I welcomed cloudy skies and even rain! Delft turned out to be a popular post-symposium destination; I ran into several other sketchers there, either visiting for the day or, like us, staying for a few.

Although my intention was to relax our first day and just make a few thumbnails, the first thing that caught my eye was Nieuwe Kerk. I couldn’t resist plopping myself down at an ice cream café table (while eating ice cream, of course) to make a full-on panoramic sketch. If you’re a Vermeer fan, you might recognize this church from his painting, View of Delft. According to Wikipedia, “It is a morning scene, with the sun to the east (viewer's right) illuminating the Protestant Nieuwe Kerk (‘New Church,’ right of centre) before its bells were replaced in 1660.” Sadly, I didn’t see any actual Vermeer paintings while in Holland (Delft’s Vermeer museum houses only reproductions), but having done a minute of research on this painting before coming to the Netherlands gave me a tiny spiritual connection to the master. I like knowing that I drew the same “new church” more than 350 years later.

Of course, “new” is a relative term – it was built in the 15th century, but it’s new compared to Oude Kerk, “old church,” which is so old that it’s crooked and crumbling and not fit for climbing.

I mention the part about climbing because somehow I got talked into making yet another hike up a narrow, spiraling staircase (see my Haarlem post for the first one) – this time to the top of Nieuwe Kerk. After 376 steps, we were rewarded with a spectacular view of Delft and Oude Kerk. I didn’t sketch up there, but I was able to get face to face with an ornate flourish near the top. It’s a detail that can’t be seen well from the ground, so it was satisfying after climbing all those stairs to add it as an inset to my sketch.

After all the symposium excitement and heat, I finally felt relaxed and comfortable enough in Delft to open my stool next to a canal and indulge in a time-consuming graphite drawing (top of post). Although I don’t often take the time to use this graphite technique, even at home, I still love its meditative quality as much as the result. As I sketched, I thought fondly and gratefully of the Porto symposium a year ago when I learned this technique from Eduardo Bajzek.

Our last day in Delft, it rained all morning, so we used the opportunity to tour the inside of Oude Kerk, where many famous Dutch are buried, including Vermeer and his entire family. It was also a good opportunity for my only food sketch of the trip: a huge slice of pistachio cheesecake with a strawberry glaze!

We said farewell to Delft and all of the Netherlands with much fondness for and gratitude toward the Dutch people, who were among the friendliest and most helpful we’ve ever encountered on our travels. Indeed, we often relied on the kindness of strangers to steer us right when more formal information was confusing or simply incorrect. For example, train information that we thought we had understood and double-checked turned out to be wrong, and we ended up on a train that would take us to a different airport, not Schiphol! It was a chance conversation with a fellow passenger that helped get us on the right train without losing much time, so we made it onto our flight. 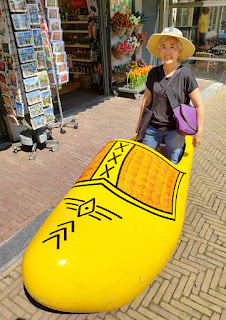 We also learned on this trip not to rely too closely on the advice of Rick Steves, who reassured us that we’d have no problem with credit and debit cards in “cashless” Amsterdam (it’s not as “cashless” as he had us believe; some merchants accepted only cash). In fact, we had more problems with Dutch ATMs rejecting our cards than in any other European country. Tina’s travel advice: As a general rule, bring along both a chipped credit card and a debit card. While most merchants can be accommodating, and you can find human clerks to resolve issues at larger train stations, some smaller stations sell tickets only through kiosks that are, indeed, cashless.

This is my last post about the Netherlands, but I have a few retrospective thoughts about my travel sketch materials and things I learned that I’ll get to soon. In the meantime, I’m eager to get back to sketching at home. I know I say this every time I travel, but it’s worth saying again: As much as I love seeing and experiencing new places, I always love coming back home even more. Home, sweet home. 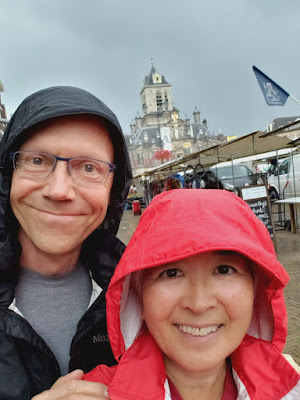