The Spires of Haarlem

The town of Haarlem is the quintessential type of place we like to begin a visit to an unfamiliar country: It’s calm and gentle so that we can recover from jetlag while still enjoying the local color. About a 30-minute bus ride west of Amsterdam, it was easy to get there directly from Schiphol Airport.

Despite the wide mix of quickly changing weather conditions – sunshine, wind, thunder, torrential rain, sometimes all within the same hour! – I sketched more per day during our four days in Haarlem than I did the rest of the trip. This small town has more than its share of distinctive church spires and towers, and I made it my mission to sketch as many as I could see.


St. Bavo Cathedral has a lovely Verdigris-colored domed top that I was determined to sketch – but why sketch it from the ground? Instead, we climbed 341 narrow, spiraling steps to the top of an adjacent tower, where I could sketch the dome at eye level.

Grote of Sint Bavokerk is a Reformed Protestant church and former Catholic cathedral located on Haarlem’s central market square (see the spire above). Only a few hours after stepping off the plane, we decided to attend a free organ concert there – and what an amazing organ it was! Jetlag was fully settling in by that point (I think we’d been awake about 30 hours by then), and despite the music, I was in danger of nodding off. To stay awake, I doodled one of the lions embellishing the top of the organ in my travel journal. Strangely, I found myself dozing off anyway, even as I drew!

Haarlem’s windmill was the only one I sketched in the Netherlands (though I did see them from a distance in both Amsterdam and Delft). Although it’s still fully functional, it no longer operates as a mill and is instead a museum that offers public tours. Using beautifully handmade, mechanical models, our tour guide explained how the sails operate and told us about the various industries – flour, cement, snuff, lumber – that use windmill power. I found it especially fascinating to learn the traditional “code” of the sails when they are stationary. For example, sails left at one angle signal a sad occasion, such as a death (like flags at half-mast). All sails in Holland turn counter-clockwise, which is the direction that accommodates right-handed millers (if you’re a left-handed miller, you’re out of luck – you still have to turn according to the convention). 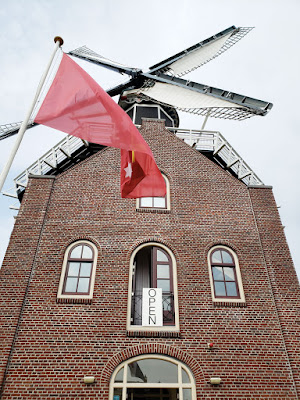 This windmill site was also the location for a sketchwalk with USk Haarlem a few days before the symposium began. Since I’d already sketched the windmill, I decided to focus on the Spaarne River that runs past the mill. It was fun to meet a few local sketchers, and I felt like it gave me a head start on the symposium.
Since Haarlem was our first stop in the Netherlands, we wanted to start trying traditional foods there, and our hosts at the boutique Malts Hotel where we stayed were very helpful in directing us. It turns out that because of Indonesia’s colonization by the Dutch in the 1800s, Indonesian food is considered part of Dutch culture. One of the best meals we enjoyed in the Netherlands was rijsttafel, an Indonesian rice dish that’s a veritable banquet of amazing flavors.

Haarlem was also where I tasted my first salt-cured haring in the traditional Dutch style: held by the tail and eaten from the larger end. (Hint: Its texture is similar to sashimi.) I regret that I didn’t sketch it first, but I wish someone had sketched me eating it.

The Saturday morning market was an ideal way to sample the herring and other snacks, such as stroopwafel, my favorite cookie from Trader Joe’s. A friend who has visited the Netherlands told me that stroopwafel in Holland are exactly the same as the ones from TJ’s, but I couldn’t believe that. Surely they are more authentic and better in their country of origin! Newsflash: They are exactly the same. Still, out of principle, I bought several packages at the market to eat and take home. Greg was delighted to find gluten-free stroopwafel (which are not available at TJ’s).

Of the three cities we visited, Haarlem was my favorite. Fun without being frantic, all the architecture of Amsterdam but without the million bikes to dodge, it was just my pace and enormously sketchable. I would return in a heartbeat.