If you hang out in the vintage colored pencil world as I do, you will be familiar with the Design Spectracolor name (branded as both Eberhard Faber and Faber-Castell) as well as the Venus-branded Spectracolor name. All of these thick-cored pencils are richly pigmented and apply with a soft, waxy coverage that many prefer. I love them, too. It’s no wonder they are highly sought by artists and collectors alike.

An interesting item came up on eBay recently that was new to me: a small assortment of Eberhard Faber Design colored pencils. Lacking “Spectracolor” in their name and sporting a metal end cap, they seemed to have the same thick core that evoked the pencils I was familiar with. Could they be similar? I’m used to being outbid because I set low limits for myself (I was super lucky to get a rare EF Design Spectracolor Doublecolor set last year), so I was surprised to be the only bidder – and a bit disappointed. They must not be good pencils if no one wants them, I thought. But I was happily wrong!

Although one was missing an end cap, most of the pencils I received are in good condition and barely used. 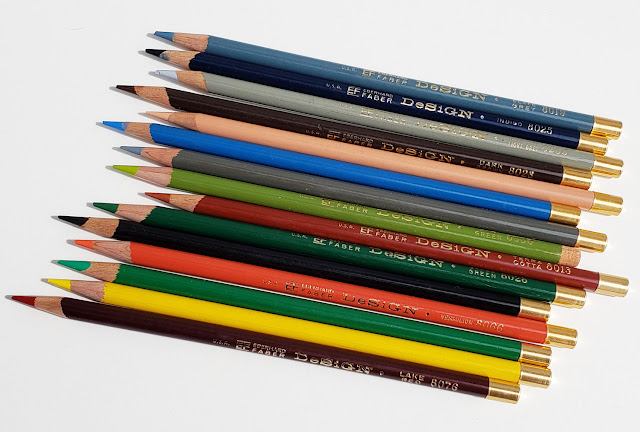 The thick cores sharpened up beautifully.

The lovely end cap, logo and general design evoke a few random Eberhard Faber Mongols I have, which are slightly different from the boxed set I reviewed last year. However, the water-soluble Mongols have very hard, thin cores with little pigment.

After admiring their appearance for a minute, I put the pedal to the metal. Sketched in a Stillman & Birn Epsilon sketchbook, the Rainier cherries came out deeply pigmented, and layers were easy to apply and blend. Compared side by side, the soft, creamy pigment is very similar to all the “Design Spectracolor” pencils mentioned previously – I’d say identical. Are the Design pencils an early predecessor? That would be my geeky guess. These relatively rare pencils are a joy to use, and I’m now gloating that I got them for a song.