One Grade or Many?

After reading my post about things I’m learning in my graphite class, a friend had some questions. Specifically, she was interested in the part where I talked about a wide range of graphite grades used sequentially to build value rather than using just one or two. She asked how different the results are with the two methods. A couple of other readers commented along the same lines.

I realized my post wasn’t complete in explaining why my instructor recommends using a range of sequential grades. She stresses this method not only as a more effective way to build value but also – perhaps more importantly – to achieve a smoother, more even tone. I thought the best way to explain this would be to simply show some comparisons: 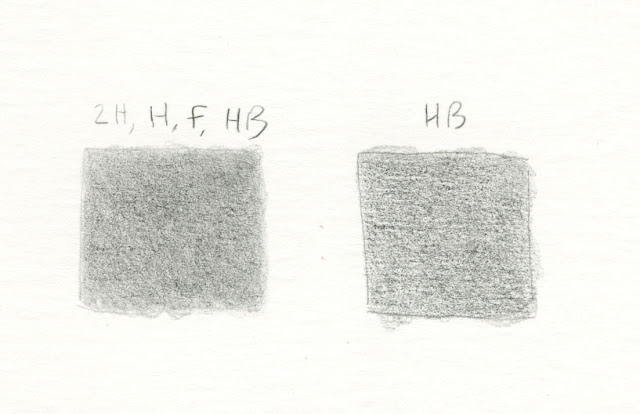 On the right is a tonal sample I achieved with an HB pencil applied in multiple layers. On the left, I started with 2H and moved up one grade at a time to HB. It’s easy enough to reach similar values whether you use one soft grade or move up gradually from hard to soft. But the one in which I used HB is splotchier and shows more of the paper’s texture, and it’s difficult to apply the graphite evenly.

This principle is similar to one we learned in my colored pencil class, too. It seems counter-intuitive, but using a harder colored pencil applied with very light pressure in multiple layers makes it easier to cover the paper’s surface. (I went on to prove this to myself more thoroughly by reviewing a wide variety of colored pencil brands, both hard and soft.)

After I scanned the image above, I kept going with the same HB pencil on the right. On the left, I used progressively softer grades all the way up to 4B (see below). With more graphite applied, I covered more of the tooth, but I can still see some of the horizontal lines that are apparent in the paper’s grain. (The paper I used here is the Canson XL Bristol “smooth” that I’ve been using for class exercises, which is not the highest quality or the smoothest paper available.) To answer my friend’s question, I’d have to the say the difference is not extreme – unless it’s important to you to achieve as smooth a tone as possible for whatever you are drawing. 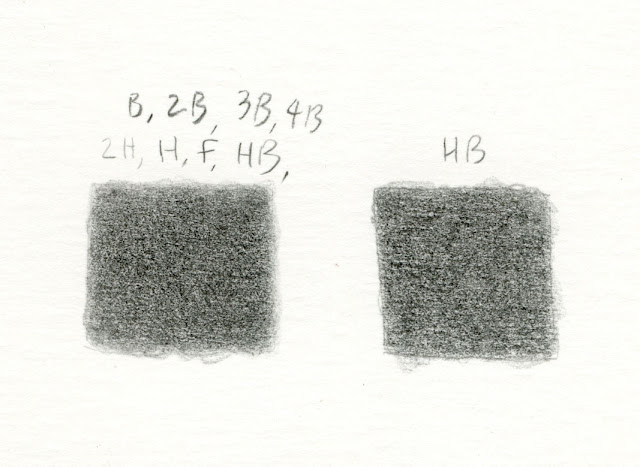 Another difference, though slight (and one that unfortunately doesn’t show in my scan), is that the HB-only sample is starting to show more of the “shine” associated with heavy applications of graphite. The other sample has slightly less shine. When an area of graphite gets that shiny appearance, it becomes harder and harder to apply more graphite over it.

That graphite shininess is very similar to the point in colored pencil use that occurs if you apply too much pressure to the pencil initially. The pressure flattens the paper’s tooth, the wax builds up quickly, and more pigment cannot be applied. Even without applying too much pressure, eventually the paper can’t support more pigment, and maybe that’s the same thing that happens with graphite when it gets shiny.


For work outside my class, it may never be my goal to achieve the degree of tonal purity and smoothness that I’m learning to achieve; I usually prefer to show some texture, especially in natural subjects. You won’t see me applying eight grades of graphite while I’m standing on the sidewalk sketching a tree. But I appreciate learning this nuance of technique because it helps me to better understand the nature of the graphite medium in general. And the more I understand graphite, the more I love it.
Posted by MiataGrrl at 3:15 PM