Derwent Coloursoft may have been the first colored pencils I bought, years ago now, specifically for their application qualities rather than because they were “a box full of pretty colors” (it’s OK, we’re all excused from that particular seduction). Up until that point, I had acquired some inexpensive brands that qualified for “pretty” but performed marginally at best (plus the ill-fated box of Prismacolors, which you can read about in the introduction post). I tried a few wax-based Coloursoft pencils, and I was impressed that they were, indeed, very soft – perhaps nearly as soft as the famed (but ill-fated) Prismacolors. I bought a moderate selection open stock from its line of 72 hues (unfortunately choosing the brightest colors, as my palette tended to be back then before I became an urban sketcher).

Derwent is a British company, but I couldn’t find information about where this specific product is manufactured.

I hadn’t used the Coloursofts in a while, and when I pulled them out for this review, I realized they weren’t nearly as soft as several brands I’ve discovered since then. They seem quite average to me now in softness, and they are a bit dustier than others in this review series.

As my apple sketch shows, areas with multiple layers cover the paper’s tooth well, and the three pencils I chose blended slightly better than Blick Studio (which is comparable in softness).

The eraser test was average – about half the pigment was removed – but when I tried to revive a minor highlight at the back of the apple that had gotten away from me, I couldn’t do it by erasing.

I haven’t used these enough recently to fairly evaluate this potential flaw, but several cores broke easily while I was swatching them. Another minor downside is that the pencil bodies are all a dark burgundy color instead of indicating the core color. Only the pencil’s end cap indicates the hue.

Costing 50 percent more than Blick, and with so many more options, I can’t see any reason to buy more colors to add to my admittedly garish collection. 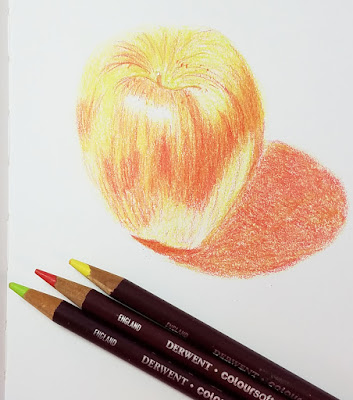 Posted by MiataGrrl at 8:04 AM