Uninspired at the UW

Do you ever have one of those days when every sketch you attempt should have just stayed in bed?

A small group of Friday sketchers gathered at Suzzallo Library on the University of Washington campus on this blustery, spitting morning. I usually find something inspiring to sketch on campus, but that tends to happen more often when I sketch outdoors. A year ago an even smaller group met there, and while my sketches inside the library were less than inspired, my last sketch outside made the trip worthwhile.

Today I had déjà vu of last year’s debacle when I began in Suzzallo’s quiet study room, a cathedral of gothic arches. It was meant to be a simple value study that went terribly wrong.

Next I ventured over to the far end of the attached Allen library, which was new territory for me. I found plenty of large windows offering what could have been inspiring views. I picked the entryway of the HUB where a small information fair was going on. Ho-hum.

Eventually I wandered over to the HUB, where I have memories of many, many mediocre meals consumed in a rush between undergraduate classes back in the late ‘70s. Unrecognizable to me now, it looks more like an airport food court than a student union building. Times may have changed, along with the wall paint and food vendors, but one thing hasn’t: Students still wolf their food down during short breaks between classes, taking far less time to eat than I could take to sketch them.

After our meetup to share sketches, I realized I had just missed a bus, so I sat at the shelter to wait for the next one. Those last 10 minutes on campus turned out to be my best: a tree and a lamp post bearing the U of Washington banner.

Edited 4/25/15: Per Matthew's suggestion, I cropped one sketch (below). I agree that it's better! Thanks, Matthew! 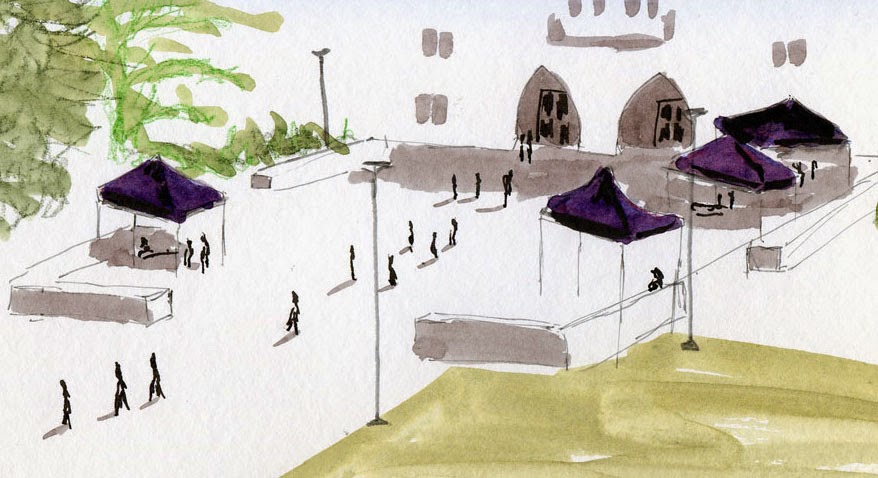 Posted by MiataGrrl at 3:06 PM