Although I had seen mention of it online, before attending the Pen Club meeting, I had no idea what a music nib was. (The blog Gourmet Pens has an informative post on the subject.) It turns out that it is an option offered by a number of pen manufacturers. Making a thick line in one direction while making a thin line in the crosswise direction, the three-tined music nib is apparently intended for use by composers and other musicians penning musical notes all day. Using a Sailor music nib (which has two tines rather than the typical three) at the meeting was intriguing, to say the least.

Music nib reviewers, however, seemed to strongly favor Platinum’s (and to a lesser extent, Pilot’s) nibs over Sailor’s. Unfortunately, no one at the Pen Club meeting had a music nib from those manufacturers for me to try and compare with. 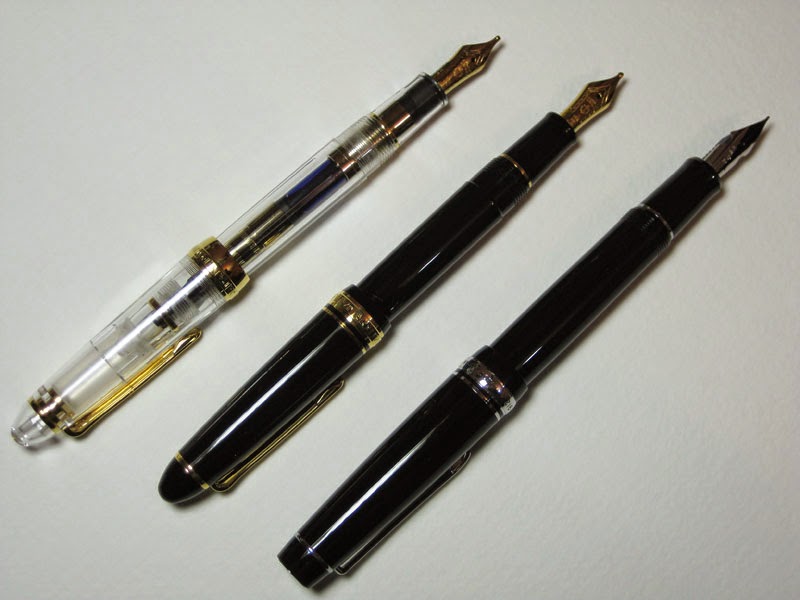 Another nib I tried at the Pen Club meeting was the Sailor zoom. Unlike the music, this nib was harder to find information on. The one I tried seemed to have slightly less line-width variability than the music, but the variability was achieved by tilting the nib backward and forward – similar to the movement required for the fude – and therefore somewhat familiar to me.

At the same time, I started hiking down the flexible nib path. It is well known among fountain pen enthusiasts that the most flexible nibs are found on vintage pens that are difficult to find (and accordingly expensive). I tried one of these (known as “wet noodles”) at the Pen Club and was amazed by its softness and flexibility. It did, indeed, produce a lovely, expressive, variable-width line.

Among modern flexible or semi-flexible nibs, I was familiar with the Pilot Falcon (also known as the Namiki Falcon), which is favored by some artists for drawing, but I’d also read many complaints that the nib isn’t as flexy as artists desire. (The far less-expensive Noodler’s Ahab is another popular pen that supposedly flexes, but I tried that pen briefly a couple of years ago and found that the so-called flexing ability was so stiff, I had to apply too much pressure to sketch with it naturally. And don’t get me started on all of its other issues!)

To confuse matters, Pilot offers several fountain pen models with the option for a “Falcon” (FA) nib that is not the same as the nib on the Pilot Falcon pen mentioned above – the Falcon nib is, in fact, much softer and flexier. (It took me quite a while to understand that those are two different entities.) Now this was starting to sound interesting!

After a few more weeks of research, I knew a flexible nib was in my future . . . (stay tuned next week).
Posted by MiataGrrl at 8:01 AM