Book Review: Now Where Was I? 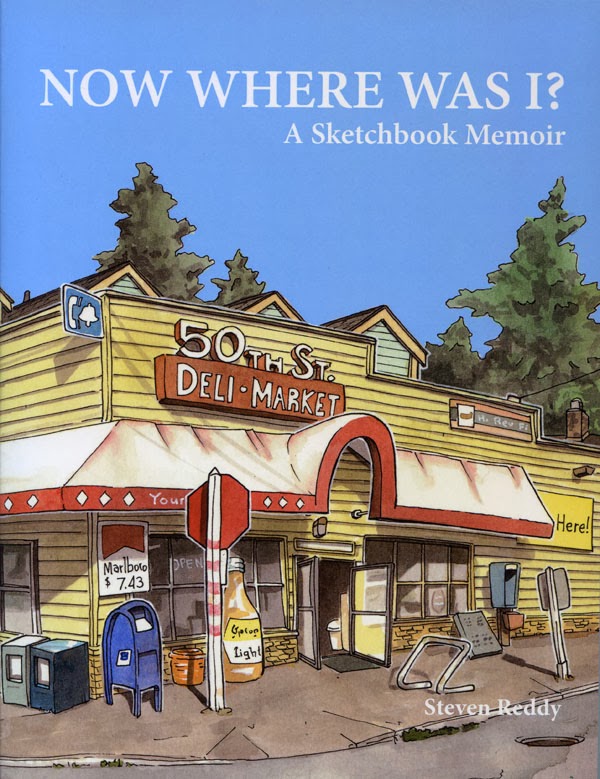 “A sketchbook memoir” is exactly the right subtitle for Now Where Was I?, a brand-new book by Seattle artist and urban sketcher Steven Reddy that was published through a successful Kickstarter campaign. Including paintings, comics and sketches spanning 35 years, the colorful, beautifully published collection reads and views very much like an illustrated autobiography – selective, retrospective, revealing and at the same time concealing.

Urban sketches include everything from portraits of gorgeous Seattle Tudor homes to plumbing pipes in Sidney, Iowa, and a house doomed for demolition in Jingdezhen, China. Older oil paintings have more abstract compositions than the on-location sketches, but their central images remain in the slightly quirky illustrative style that has become Steve’s signature. In fact, it’s easy to see that his urban sketches of thrift shop interiors, a favorite subject, had their roots in paintings from decades earlier that depict collections of seemingly unrelated objects: Piles of random stuff come together in a way that somehow makes sense.

Influenced by well-known comic-book artists like Robert Crumb and Chris Ware, Steve’s autobiographical comics are both hilarious and heartbreaking. He reveals just enough about his daily life, former and current relationships and personal angst to leave plenty of room for speculation – but they are not so confessional that they make you squirm. My favorites among the comics are his narratives of dreams. All dreams are so strange and disjointed that the panels of comics are an ideal way to narrate them. (One about George Clooney reluctantly sharing his sketchbook with Steve is so funny and bizarre that I wish I could view it as a film short!)

The overall tone of the works is of intense curiosity about the details of his visual world – no stone left unsketched. At the same time, the focal point of each sketch is crystal-clear, so you have to assume that it’s the result of careful editing. Occasional, brief text provides some context without overly explaining. I found myself literally laughing out loud at his descriptions of questionable foods encountered in China, yet the only sketch of a food-like substance is a chicken’s beak discovered in a meal. ‘Nuff shown.

The book is not meant to be a collection of only polished current works; Steve bravely includes some sketches and comics he made as a teenager and young adult that other artists might have chosen to keep hidden. In true autobiographical form, his story includes “where I came from” as much as “where I am now.”

If you want a copy of this inspiring, engaging, entertaining book, you’d better hurry to his Etsy site – only a limited number has been published.
Posted by MiataGrrl at 9:26 AM