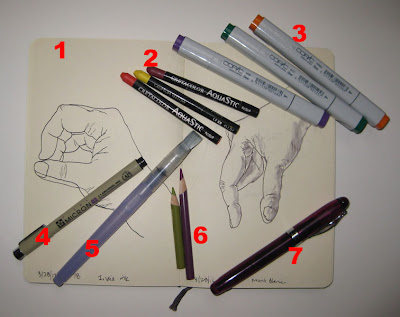 The other day on the Wet Canvas forum, Jan mentioned a product she had tried and decided she really hated. I was curious about why, and it was interesting to hear her perspective. In the forum thread, I jokingly proposed that we should all list our “Bottom 10” most-despised products.
I was kidding at the time, but then I started thinking about it some more. Learning about why someone particularly dislikes a specific product they’ve tried can be just as informative as learning about why they love another product. Idiosyncratic prejudices – hating all dark blue inks because they remind someone too much of parochial school, for example (yes, I’ve heard that one) – are perhaps less helpful (though often entertaining). But if a product is bad or doesn’t perform as well as a competing brand, that’s useful to know.
At the risk of offending people who love these products, I present here Tina’s Bottom 10, in no particular ranking order. (Some products are not pictured because I’ve already given them away to people who love them. This is what’s wonderful about the wide variety of products available and an even wider variety of artists: There’s always someone who likes something I don’t.) There are other products I hate even more than these and will not use, but they don’t appear on this list because I think my reasons would fall in the “idiosyncratic prejudice” category (pens that don’t uncap easily or any dusty medium, like pastels and charcoal).

1. Moleskine Sketchbook: Boy, do I have a love/hate relationship with the paper in this sketchbook. First of all, I should say that I otherwise love all things Moleskine. I use a Moleskine planner every year, and I like their watercolor sketchbooks (though I wish they’d come out with a portrait format to go along with their landscape format. It’s not as if all watercolor painters paint nothing but landscapes). The thick, smooth paper is ideal for markers and pen and ink and can also support collage. But that nasty manila color makes many inks and markers look terrible. Even worse, it cannot take a wash worth beans! It actually repels water. For a long time, I kept using water-soluble markers and watercolors, hoping that one day they would miraculously stop beading up when I washed them, as if the paper were coated with wax. I finally quit banging my head against the brick wall and started using it only with permanent markers (so I wouldn’t be tempted to try yet again to make it wash).

2. Cretacolor AquaStics: I started using these shortly after I began my adventures in mixed media art journaling, and even as a beginner I could tell these water-soluble crayons weren’t the best. They apply dry and chalky, and it takes a lot of water to make their water-soluble properties wake up. The color range is also strange – so many similar yellows and light blues, for example, and hardly any good greens. A short time later I discovered Caran d'Ache Neocolor II water-soluble crayons, which are exactly the opposite: creamy, rich, easily washed and available in a huge range of colors. Buh-bye, AquaStics.


3. Copic Markers: Favored by manga cartoonists and graphic designers, these alcohol-based markers are also being used skillfully by some urban sketchers (Liz Steel comes to mind) to interesting effect, especially when blended with a blender pen. I bought a small assortment, pulled the cap off the first one and nearly keeled over from the incredibly strong smell. Because they are alcohol-based, they also seep all the way through most papers, so you either have to use only one side of the sketchbook page or use special paper. Forget it. (These are up for grabs if anyone wants them.)


4. Sakura Pigma Micron Pen: I used Pigma Micron mechanical pens as my default waterproof drawing pen for quite a while, but I was never completely happy with the tip that had to be held just right or it would feel scratchy. I replaced them with Copic Multiliner SP pens, which have the added benefit of being refillable.


5. Niji Flat Waterbrush: Although the rest of the waterbrushes in the Niji/Kuretake line (same brand, marketed under different names) are on my Top 10 list – they are probably my single, most-often-used art tools in the field – this so-called flat waterbrush is useless. I’ve tried it in many ways, and it’s impossible to get a decent watercolor wash with it. Plus the cap is too hard to get back on without risking bending the hairs.


6. Prismacolor Colored Pencils: These wax-based colored pencils are many colored pencil artists’ favorite, including nearly every colored pencil technique book author I’ve read. They do apply with a soft and creamy texture, which is probably why they are so highly favored. But the leads break so easily that more of the pencil ends up in my pencil sharpener than on my paper. After trying several brands, I settled on oil-based Faber-Castell Polychromos colored pencils (and eventually the more versatile water-soluble Faber-Castell Albrecht Durer pencils, which have become my colored pencil of choice).


7. Noodler’s Ahab Flex Nib King Philip fountain pen: When I first started experimenting with fountain pens as a sketching tool, I did a lot of research to find out what others liked, and the Noodler’s Ahab pen with its flexible nib was mentioned over and over. For 20 bucks, it was easy to buy one to try. But the regret came later when it kept clogging, skipping and blobbing, and being new to fountain pens for sketching, I thought that was just the way all fountain pens were. Soon I was doing research just to find out how to vigilantly maintain and even modify the Ahab to improve performance. I never got around to learning to use its famed Flex Nib because I was too busy trying to make it write! I almost gave up on fountain pens completely, assuming I just didn’t have the patience to maintain one. Then someone mentioned the carefree ease of (equally inexpensive) Lamy pens. Eight Lamy pens later, I hardly use anything else to draw with anymore.


8. Noodler’s Black Bulletproof ink: At the same time that I was researching fountain pens, I also read about inks, and once again, the name Noodler’s kept coming up. I knew I wanted a black waterproof ink to start with, so I chose Noodler’s Black Bulletproof ink (among several waterproof black inks Noodler’s offers). I filled that infamous Ahab pen with it and discovered nothing but misery – all that clogging, skipping and blobbing! Was it the pen, the ink, or me? When I gave up on the Ahab for my first Lamy, Noodler’s Black Bulletproof was the first bottled ink I filled it with. At least the pen wasn’t clogging and skipping anymore, so I could blame those traits on the Ahab. But the Noodler’s took so long to dry that I was constantly smudging and smearing it. Further research brought me to Platinum Carbon Black ink, which easily placed on my Top 10 list for its fast-drying, non-blobbing, perfectly waterproof qualities.


9. Copic Multiliner SP pen, Sepia: After deciding that my black Copic Multiliner SP was my favorite mechanical drawing pen, I got one in Sepia for times when I want a warmer line. I think of sepia as a rich, dark brown; this pen’s color turned out to be “tan” at best. I don’t know if I got a defective one, or if this is just the way sepia looks in the Copic world. Never mind; I got a Faber-Castell Pitt Artist Pen in sepia, and it does the job just fine.


10. J. Herbin Glass Dip Pen: Using a dip pen is the most efficient way to test a variety of fountain pen ink samples (such as the ones I’ve been getting from GouletPens.com), but I’m not very good with a traditional metal nib dip pen, so I thought this glass pen would be a fun alternative. Is there a trick to this that I haven’t figured out yet? I couldn’t get it to hold sufficient ink, and the tip is so scratchy that it’s more esthetically pleasing to write with a toothpick!
Posted by MiataGrrl at 2:42 PM