When I wrote Part 6 of my vintage colored pencil series, I thought it was my last installment. Then some new pencils came my way from other pencil aficionados who had heard I was interested in colored pencil history, and lately I’ve been poking around eBay. So the series continues!

When a small set of nearly new Try-Rex Omega pencils was offered to me in a trade, I was delighted. Although the Try-Rex brand is familiar to me (especially the pink Futura), I didn’t know the line had included colored pencils. They were made by the Richard Best Pencil Co. of Springfield, NJ. According to CW Pencils, Richard Best eventually merged with the J.R. Moon Pencil Co., but no date is given.

Try-Rex refers to the pencil line’s triangular barrel. Unlike some contemporary triangular pencils, the Try-Rex triangle is slightly rounded, making it comfortable to use and very distinctive. “Omega colored pencils are Try-Rex,” says the box, “the pencil shape with three round and three flat panels designed to fit the fingers.” So it’s a unique cross between a hex and a triangle.

Speaking of the box, it’s made of simple cardboard, but I like the way the contents slide out in a drawer. It also has a hinged back to form an easel-like case for the pencils. That must have been a thing back then, because I’ve seen photos of other colored pencil brands with similar packaging. (I have an Eberhard Faber Mongol box with a similar easel stand.) 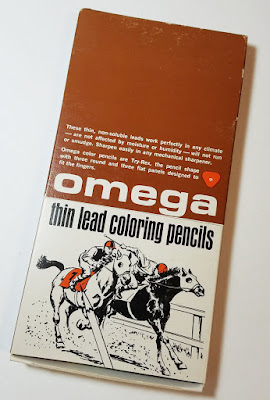 My test scribbles indicated that the Omega pencils’ “thin, non-soluble leads” are very hard and crisp – similar to Verithin and Col-erase – so I chose a Stillman & Birn toothy Alpha sketchbook for a test sketch. As expected, the hard cores filled in the paper’s texture easily, and I enjoyed the coverage of the first two or three layers of color I applied. Sharpened to a point, they also handled the small details in the tomato stem and leaves nicely.

After a while, though, I realized that the cores don’t contain enough pigment for rich, complex hues, and I started getting frustrated applying more layers but not seeing the colors deepen. Then I remembered an idea . . .


Stay tuned for the next post in which I show how I finished this sketch. In the meantime, enjoy the beautiful Omega logo on these pencils. (I can’t be the only one who misses old-school typography, right?) 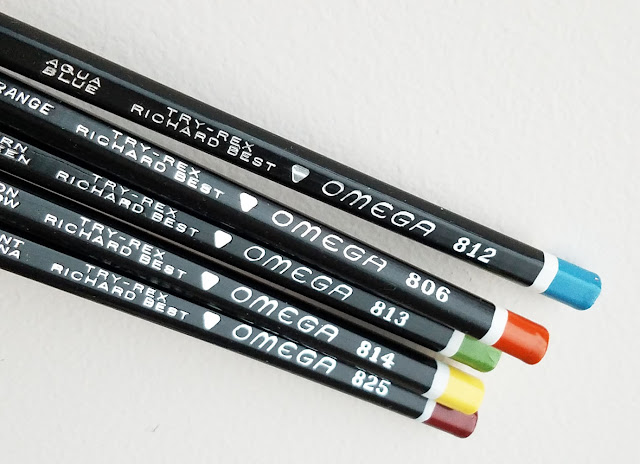