If I could take only one type of sketching medium with me to the proverbial desert island, it would be Japanese water-soluble brush pens. These sophisticated, high-tech marker pens have amazing tips that mimic the marks of traditional Chinese and sumi ink brushes. What’s more, the pigments they contain are water soluble, so a skillful hand (and sometimes even a clumsy one) can create subtle washes for shading and contouring with nothing more than a brush and water. Colors from multiple pens can also be blended right on the paper.

Three of my favorites are Tombow, Akashiya Sai and Akashiya Thin Line. All three types of pens are non-toxic and acid-free but not lightfast. This chart compares lines made with a few sample colors, including the effect of a light wash. (I’ve also included a line made with Akashiya’s Outline Brush Pen, which contains permanent ink.) 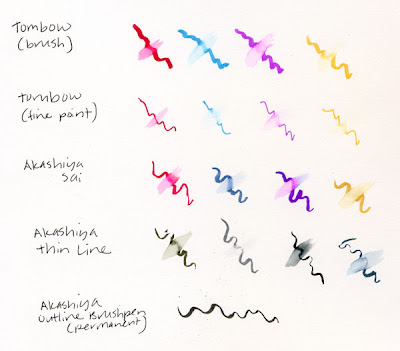 Tombow dual-brush pens, so-called because they have a fine point on one end and a “brush” tip on the other, are a favorite among manga artists because they come in 96 dazzling colors. The tips are not actual brushes but made of a hard fiber. They don’t flex like a real brush, but holding the tips at various angles results in varying line weights. The self-portrait above, the hand sketch below and a close-up of the line were all made with the “brush” tip of a Tombow pen.

I’ve been experimenting with these pens for only a couple months, and I’ve been using them mainly as a sketching medium. Other artists use them more as a painting medium, which I aspire to. Most notably, Scott Wilson of the Taranaki Sketchers makes lively, colorful urban sketches (that look more like watercolor paintings) using Tombow markers as his primary medium. One technique I learned from his blog is literally painting with Tombow pigment by picking up color from the pen tip with a wet brush, and using the brush to apply the color to the paper, rather than applying it with the pen itself. (This technique works with Akashiya pens also.)

Unlike Tombow markers, both Akashiya Sai (available in 20 colors) and Akashiya Thin Line (in five colors meant to evoke traditional sumi painting colors) brush markers have actual brush tips made of synthetic hair. They both make beautifully variable line widths, and the Thin Line collection can, indeed, make a very thin line – as thin as a Copic Multiliner SP 0.25 mechanical pen. Because the tips are real brushes, they can flex and make such subtle line width changes that it’s difficult to believe the marks weren’t made with a traditional brush and ink.

Compared to the Akashiya pens, the Tombow makes a line that clearly looks like a marker. The Akashiya pens resemble markers only in their convenient (and unfortunately expensive and disposable) plastic casing. Shown here are sketches made with each type of Akashiya pen and close-ups of the lines.

An Akashiya marketing video shows the Thin Line in action. The Thin Line pens are designed to appeal to women by resembling cosmetics. Ironically, I find a pen as slender as an eye liner to be difficult to sketch with – gimme a big, beefy man’s pen! Even worse is the perfectly cylindrical shape, which allows the pen to roll off the table top constantly. But these are my only complaints about an otherwise remarkable pen.

As with the Tombows, I’ve been using the Akashiya pens for only a short while, so I’m still just beginning to learn about their potential as a sketching medium. With all of these pens, some of the pigments can turn out surprising hues when washed with water, so if accuracy of hue is important to you, it’s a good idea to make test swatches. Me – I live for happy accidents, so test swatches be damned. Rock on, Japanese brush pen makers!
Posted by MiataGrrl at 7:00 AM