A Box of Pencils 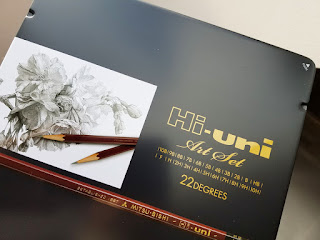 No one needs 22 grades of graphite drawing pencils.

I wanted to say that up front so you wouldn’t think this post was about rationalizing why I need a whole set of Uni Mitsubishi Hi-Uni pencils or how I’d use all 22 grades. (This is not unlike why I own entire 120-color sets of colored pencils when 24 or 36 would be plenty, especially when I’ve lately been trying to use only three primaries at a time. But that’s the subject for a different post.)

Perhaps some graphite artists use several pencil grades to achieve the fullest range of tonal values, but even so, I doubt they would use 22. For most of the sketches I do, I find that I can get by with two pencils at a time – one mid-range (such as HB or F) and one soft (such as 4B or 6B). I’ve also done many sketches with just one relatively soft pencil (maybe a 2B or a Blackwing). After all, one of the virtues of graphite is being able to create a variety of tones simply by layering or varying the pressure.

I already knew from my experience with a few individual Hi-Uni pencils that the line is excellent – the core, the wood casing, the finish. Smoother than any pencil I have used, the softer grades write and draw almost soundlessly. Esthetically, they are lovely – the shiny maroon lacquer is imprinted with gold, and the end has an elegant divoted yellow dot. They have become my favorite pencils. What would it be like to own an entire extravagant set?

When I ripped the wrapper off the metal box and opened it for the first time, I was immediately taken back to my mom’s traditional cedar chest. Kept in my parents’ bedroom, the chest stored silk kimonos, dark wool sweaters and other clothing and accessories that rarely saw the light of day. It seemed she lifted its heavy lid only a couple of times a year, so as a child, the scent of cedar told me I had an opportunity to peek inside at the otherwise hidden treasures.
At the same moment that I inhaled this memory-infused scent, I saw the most extraordinary sight: Shipped all the way from a vendor in Japan, all 22 pencils lay in their slotted tray with their logo side facing up. Now, I’ve opened plenty of flat packages of colored pencils to find them randomly and haphazardly in their slots and thought nothing of it – I’m not so fussy or OCD to be bothered. But when I saw every Hi-Uni lying so perfectly, even if the pencils had been placed in the tray mechanically (though I doubt it), I had to believe that a human at the end of the line was responsible for making sure they all faced up by the time the lid was closed. (I immediately took a photo so that I could bear to take them out.)

The next marvel was examining their unsharpened ends. From using a 10B previously, I knew that it had an unusually thick core; how thick would the cores of the other grades be? It turned out that the full range includes three sizes: 10B and 9B have the largest; 8B through 3B have a medium-sized core; and 2B and harder have a small (standard-size) core.


Though it took me half a day to get over the sheer beauty of that box of pristine, unsharpened pencils, I did get over it – after all, pencils are made to be used. I took out my knife; certainly, the larger-core pencils deserve a hand-sharpened chisel cut to ensure the widest range of marks. Compared to some other pencils I’ve knife-sharpened, the wood of the Hi-Unis cut easily and evenly without splintering. For the smaller cores, I used my KUM two-hole, long-point sharpener and amused myself with the delightful curls of shavings that emerged.

All of that joy came even before using the pencils. And now that I’m using them, they are as smooth and perfect as they appear.

No one – maybe least of all me (I tend to favor softer cores and will probably rarely use the harder ones) – needs 22 grades of graphite drawing pencils. Still, it’s rare to experience complete pleasure from such a simple product made well and presented with pride. 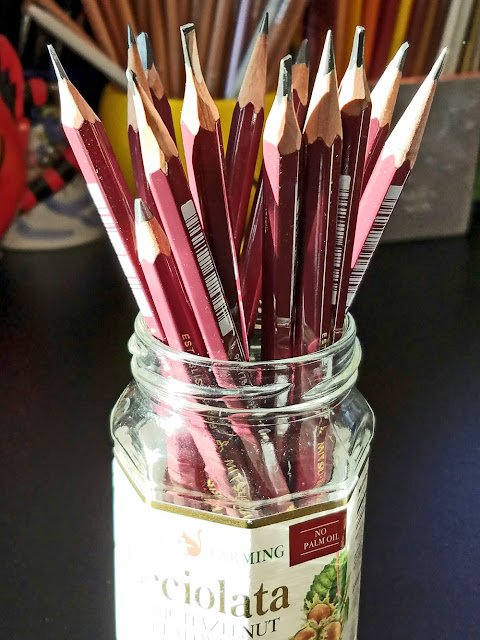