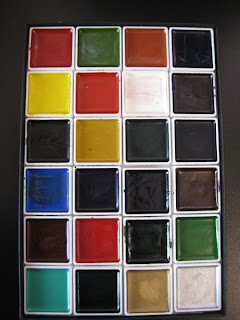 While browsing around JetPens.com, I recently stumbled across a set of Akashiya watercolors, which are apparently made to emulate traditional Japanese watercolors used by sumi-e painters. I have fond childhood/teen memories of watching my mom learn (through a correspondence course with a sumi-e master in Japan) to paint with sumi-e, and she occasionally used color from a small set of traditional colors. Riding a wave of nostalgia, I impulsively ordered the 24-color set.

The first thing I noticed when I opened the box was that the colors in the palette looked dark and blah. I know most watercolors look very different in the pans than they do wet, but what – five shades of black? To my surprise and delight, some of those “blacks” ended up being very light, bright hues. 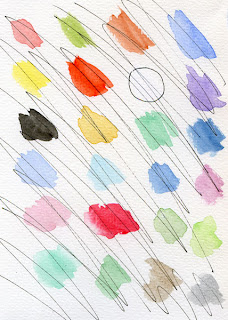 Compared to my Yarka and Sakura Koi watercolor sets, the Akashiya seem more transparent. The splotch I circled in the second row looks white in the pan, so I assumed it was the equivalent of the tube of white gouache that’s sometimes included in watercolor sets. But as far as I can tell, even this white is mostly transparent, so it lightens a value without giving it opacity.


The palette is very different from most off-the-shelf palettes I’ve seen. It’s actually somewhat similar to my Sakura Koi box of 24 colors, and a couple of the blues and greens are really nice. (No brown at all – I suppose that’s the easiest to mix – and only one yellow.) So I’m delighted to try out some new hues. Most of the flowers in the sketch below came straight from the box – hardly any mixing. This set is going to make me lazy!
Oddly enough, the palette includes a metallic gold and metallic silver (lower right). I don’t know how much use I have for those, but they’re unusual. One other thing to note is that the square pans are not attached to the palette – they are all individual boxes that come out of the cardboard tray (really just a shallow box) they come in. The whole box is not at all portable, since it’s too large to hold in the field (and if you drop it, all the individual pans would come flying out).

Overall, I’m happy that I gave in to my impulse and am looking forward to exploring these thoroughly transparent colors.
Posted by MiataGrrl at 4:54 PM