A while back, I was digging through a box of art materials I had had for a long time, looking for something, when I came across a few random Sanford-branded Prismacolor watercolor pencils. I don’t know why I had only a few or when I had acquired them, but I’m guessing I’ve had them since the early 2000s or possibly even the ‘90s.

Curious, I gave them a scribble. They are nearly as soft as traditional (wax-based) Prismacolor pencils, and the cores are equally thick. In application, they feel very similar to traditional Prismacolors, too – a bit waxy, almost like crayons. The big surprise, however, came when I gave the swatches a swipe with a waterbrush: Their pigment quality is very high. My interest piqued, I started looking for more on eBay and fairly quickly found a nearly new set of 24 at an excellent price (half the price of a contemporary set). 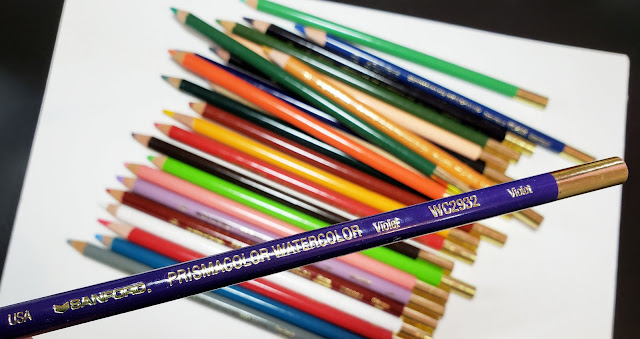 Although the set gives me a good color selection, I had so much fun using only primary colors when I reviewed Cretacolor Marino pencils recently that I decided to do it again with the Prismacolors: I chose Crimson Red, Sunburst Yellow and Copenhagen to make the apple sketch. Compared to the Marinos, the Prismacolors are so highly pigmented that I didn’t need to apply many layers. They blend beautifully and easily. I left the cast shadow unactivated so that the dry application could be seen. Since they are very soft, the Stillman & Birn Beta paper’s tooth is apparent (I like the optical blending that occurs with dry pencils).

Many vintage pencils are not comparable to contemporary pencils, either due to lack of pigment or some other factor. However, I had such a good experience making the apple sketch that I did something I rarely do in reviews of vintage pencils: I made comparison swatches with my most-often used contemporary water-soluble colored pencils. The swatches below show heavy applications of Faber-Castell Albrecht Durer, Caran d’Ache Supracolor and Caran d’Ache Museum Aquarelle next to the vintage Prismacolor. The Prismacolor competes very favorably in pigment content and solubility with all of them. In softness, it is probably closest to Supracolor but waxier in application.

I wonder if these old Prismacolors ever came in sets larger than 24. . . ? Looking at Mexican-made contemporary sets on Blick and Amazon, the largest seems to be 36 – a far cry from the staggering 150 colors available in Prismacolor Premier’s traditional line. Prismacolor is obviously not making the same investment in water-soluble colors, so perhaps that was always true.

Regardless of the number of colors available, I’d be leery of the quality of any contemporary Prismacolors (I’ve ranted about them previously . . . I had to toss a set after the cores continually broke as if already broken inside the barrel). But I’m going to keep poking around on eBay to see if a larger vintage set ever shows up (based on the price I paid, I don’t seem to have much competition from other buyers!). In the meantime, I’m delighted that I grabbed these pencils and will happily use them.

When I reviewed my Holland sketch kit, I mentioned that I was unhappy with the brick red I had been using and wanted to find a replacement. The Prismacolor set includes a Terra Cotta that might be what I’m looking for – I’m eager to give it a try in the field. 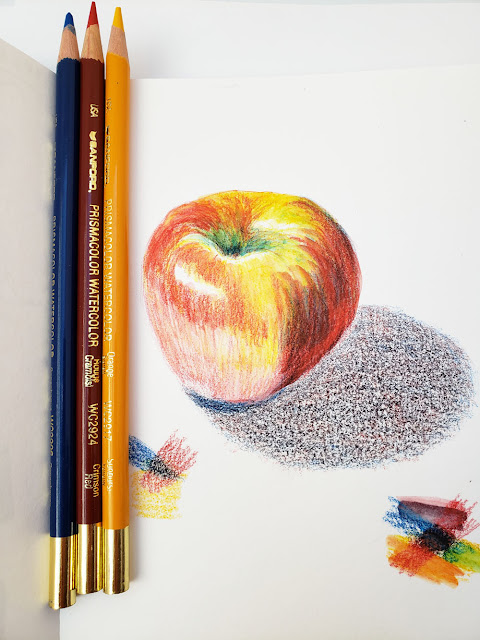