After the blistering heat of the previous outing, USk Seattle lucked out on Saturday – a mostly sunny morning with temps in the mid-70s! Although we’ve met at the Olympic Sculpture Park several times, and I’ve also sketched there on my own, the group hadn’t met at the park in five years (the last time was part of our Pity Party Weekend after the Vancouver, B.C., West Coast Sketch Crawl was cancelled). I was happy to get back there again, especially on such a perfect morning.

I was so happy, in fact, that I made no attempt to resist the cliché image every photographer likes to capture at the park: the Space Needle under the legs of Alexander Calder’s vermilion Eagle. Nine years ago, I made a nearly identical composition, and when I looked back at it, I realized how much the surrounding trees had grown. The first time I had sketched it, most of the Needle’s body was visible; this time, I barely framed its head.

Richard Serra’s Wake, another work that I have sketched before, called to me again. The series of gracefully curved monoliths needs people nearby to show their scale, and David sketching it conveniently gave me just that.

Leading up to and between those two sketches, I made a couple of other small sketches. One was a study for a full view of The Eagle that I decided was better as a thumbnail. The other was of Roxy Paine’s Split, which is one of several works at the park that I have avoided. It’s a shiny, metallic, realistically shaped tree that, in a sketch, can look just like an actual tree – I don’t really know how to draw it so that it’s obviously an artwork. I tried a small composition in black and white that probably looks like an ordinary tree.

The trip downtown was an opportunity to sketch more than sculptures – people! I caught several light rail commuters and even yoga students at the park participating in the largest class I had ever seen. Still rusty from the pandemic, my people-sketching skills needed the practice.

Posted by MiataGrrl at 7:00 AM No comments:

One of the sections in the book Spotlight on Nature that inspired me most was related to the role nature plays in any urban composition. For me, the most important natural element is trees. Thankfully, they are everywhere in the urban environment (and I hope that remains true). Just like cars, they are unavoidable, so I may as well use them, whether or not they are a key element in a composition.

An idea mentioned and shown in the book was to use a tree as a framing device, and now I look for tree frames whenever I take walks.

One of our favorite neighborhood restaurants is Kona Kitchen. Just a few blocks from home, it was an easy takeout meal (my favorite is Hawaiian-style fried rice with scrambled eggs on top) in the Before Times and continues to be After. In fact, in the early months of the pandemic, we learned that both the owner and her husband had died of COVID, and we tried to patronize the family-owned restaurant even more after that. Even though we didn’t know them personally, their deaths felt personal: They were among the first of many people we were somehow connected with (if only peripherally, like this couple) that would eventually perish of COVID.

Across the street from Kona is Café Javasti, which makes some of the best scones in town. I usually get things to go, however, because they have only a couple of small outdoor tables. Walking by the other day, I saw an open table, which gave me an opportunity to finally sketch Kona Kitchen.

I wasn’t thinking about it at all when I decided to stop there, but the Beya Rebaï -inspired palette I’m using turned out to be a good fit! Kona’s colors are blue and orange with brown “thatched” awnings that evoke the Hawaiian theme.

The palette’s pastel tints are teaching me an interesting way to convey low-contrast values. The Kona building is white, and on that bright morning, it was almost equally lighted on both sides of the corner – a frustrating lighting situation for sketching a building (and of course that situation also happens on overcast days). Using the cast shadows as a guide, I figured out the side that was a little less lighted (though it was difficult to see any contrast). I colored both sides with Caran d’Ache Museum Aquarelle’s Apricot (041) but activated it only on the slightly less lighted side. Keeping a pale tint of a warm color and a cool color in my kit would be handy for this purpose (which comes up relatively often).

Trying to stay cool during our second (shorter) heatwave of the summer, I went out on our breezy back deck again (above). Although I keep saying there’s nothing back there to sketch, I somehow manage to come away with something every time, don’t I? I’m not saying it’s a gorgeous work, but if I put some color on the page, that’s good enough for me. 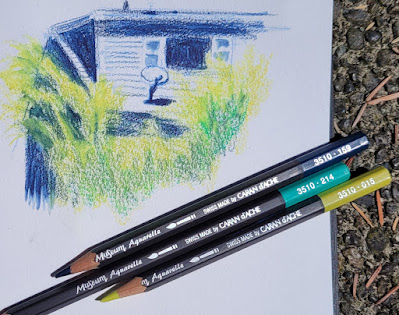 In this case, the color is the alien palette in Caran d’Ache Museum Aquarelles that I’ve been trying, inspired by Beya Rebaï's Neocolor II sets. Discovering that the palette I had picked out lacked a good blending yellow, I added Olive Yellow (015), which is the closest I could find to Rebaï’s Chinese Green (730) in Neocolor II. It sufficiently warmed up minty Beryl Green (214) for foliage. I do like Prussian Blue (159) for deep shadows and have used it before, though typically in the winter, not the dog days of summer (which, according to the Romans, are led by Sirius rising with the sun, and “the heat from the two stars combined is what made these days the hottest of the year, a period that could bring fever or even catastrophe.” Curious about that expression, I finally looked it up). 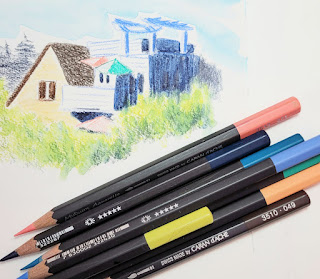 Starting to sweat on the deck, I went upstairs and turned on the AC in my studio, but I wanted to continue playing with this palette. Through the window, I noticed that our neighbors had put up several umbrellas to keep the heat away from their southern windows, which gave my sketch a few spots of color. I usually see the Seattle sky as a relatively cool blue, but on this hot afternoon it looked warmer than usual. Turquoise Blue (171) felt right (below).

With an unfamiliar palette on this overly familiar scene, I ended up using all the colors except Vermilion – probably too many colors for a small composition and more than I would typically use. I have to remind myself of the old adage: Just because the colors are in my palette doesn’t mean I have to use them. (It’s not an adage? It should be.)

While the rest of the city rejoiced the return of the Blue Angels after a two-year COVID hiatus, my attitude was bah-humbug. Call me jaded: I grew up on Lake Washington, hearing the roar of hydroplanes and seeing the Angels fly past my face from our back deck. Driving through summer-weekend traffic to bake in the sun for hours to get a good viewing spot doesn’t appeal to me much.

Greg still enjoys seeing them, though, so we lazily walked the few blocks to Maple Leaf Park, where the Angels were visible as tiny dots with contrails. The last time we did that was in 2018 on a much cooler day that had attracted a small neighborhood crowd. Last Saturday afternoon the temperature was in the low 80s with no shade anywhere. Although the center of the park was busy with a large volleyball tournament, the south end where the jets could be seen attracted only a half-dozen or so. Curmudgeon that I am, I was more pleased to see Her Majesty quietly in the background.

On Lake City Way where the major arterial is divided, a sculpture sits in the middle of the divide near Northeast 123rd. I always call it “the baked potato” (with a knife going through it), but every time I’ve tried to find its actual name or artist, I’ve come up empty. (I searched again before writing this post, but I struck out again.) When Greg had a quick errand nearby, it was a good opportunity to finally sketch it.

As I concluded in my review of Caran d’Ache Neocolor II, the water-soluble waxed pastels will unlikely become a go-to urban sketching material. However, illustrator Beya Rebaï’s palette, the basis for the limited-edition sets, is so far off from my usual palette that I became intrigued trying to use it. It’s worth further exploration – but with my beloved Cd’A Museum Aquarelle pencils!

I had never compared the Neocolor color line with Museum Aquarelles, but since they are both made by Caran d’Ache, I assumed I’d find most colors to overlap. I was surprised that this was not the case. Of the 20 colors in Rebaï’s warm and cool sets, I could find only seven overlapping with Museum Aquarelles (and several of those are significantly different in hue or intensity, though they share the same numbers).

On the swatch page below, I picked out all the Museum Aquarelles that matched Rebaï’s Neocolor palette (marked with *) and added others that are not part of the palette but look like they could be. Then I chose four warms and four cools to use (circled). My selections are the lower-key hues that are closer to the way I use color while still staying true to her palette. 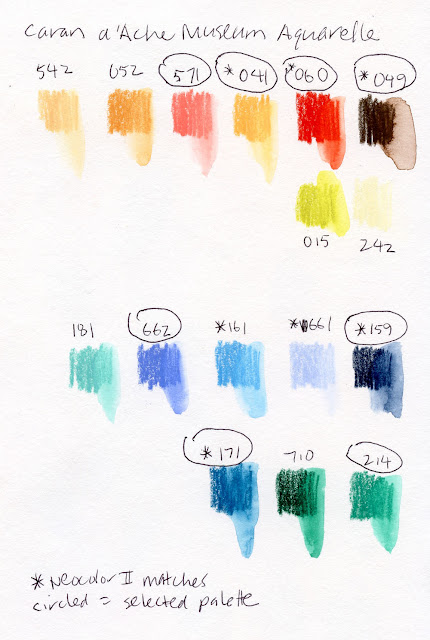 On the first drizzly day in weeks, I found a great sheltered area at U Village from which to sketch umbrella’d tables. The palette worked well for the umbrellas and large tree trunk, which required mixing several colors into a dark, interesting neutral. But then it was time to mix colors for the foliage, and the only green was the minty, non-natural-looking Beryl Green (214) (which was perfect for the umbrellas). I tried mixing Prussian Blue (159) with Apricot (041), the closest I had to yellow, but the result was still too close to the synthetic green of the umbrellas. I might have to pull in a yellow from my normal palette. 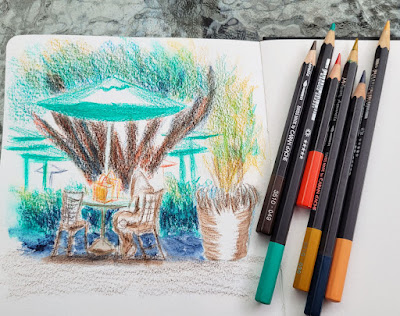 It’s going to take some practice to use this palette, but I like it for summer. I’m also happy that it keeps me from using my comfortable default colors. We’ll see how long I stay with it before I start drifting back to my own palette.

Even more than favorite tools or media, I think we all have a color comfort zone that’s difficult to push out of. Learning to use a new tool or media is a matter of practice, but favorite colors are much more idiosyncratic and emotional. When I found the Museum Aquarelle pencils in Rebaï’s palette, several had not yet been sharpened past the factory sharpening, which shows how little I had used those colors. It’s a fascinating exercise to deliberately use colors I’m not typically attracted to!