While I’m in the act of sketching, especially on location, I’m not much aware of my physical actions – my full attention is on whatever I’m drawing and how I render it. But one day recently when I was covering a large area of the page heavily with pigment (the foliage and shadows in this sketch), I became aware of how I had changed the grip on my pencils as I colored. I’ve seen instructions in drawing books about various grips, but it’s not the kind of thing I remember or think about when I’m actually drawing. For me, the changes are mostly intuitive.

Out of curiosity, I started paying closer attention to how I hold pencils at life-drawing sessions, and I realize I change the grip frequently, depending on the task. To quickly block in a shape while measuring, I hold the pencil fairly loosely. While I’m drawing the main contour lines and small details, I hold it more conventionally as I would if I were writing (fingers close to the point and the back end of the pencil supported by the crook between the thumb and forefinger). And when I’m shading large and even relatively small areas, I hold the pencil as if it were a piece of chalk or charcoal (the pencil inside my fist, shown below).


As expected, the crayon grip is useful for applying lots of pigment quickly when fine details are not needed, but I was able to easily draw the contour of this simple shape, too. I switched to my conventional writing grip only for the stem, its shadow and the slivers of the darkest cast shadows under the pear. The crayon grip was especially useful when loosely hatching the large cast shadow. I didn’t have to watch myself to make sure I kept using the crayon grip; it does feel intuitive to me.

(By the way, in case you’re wondering: Except for doing an exercise like this, I don’t recommend these pencils. They contain more binder than pigment, so after a layer or two is applied, the pigment starts to slide around on the waxy surface below, causing the dark chunks and blobs you can see on the right side of the pear instead of blending with the previous layers.)

Next I tried using much more highly pigmented Caran d’Ache Luminance pencils, which are the same diameter as Caran d’Ache Museum Aquarelle pencils; both are just a smidge wider than conventional pencils. (I chose the same pear but at a different angle so that its unusually pronounced cleavage would be more apparent; maybe it’s part peach?) Obviously, I had caught myself using the crayon grip during life drawing with conventional sized pencils and on location while using Museum Aquarelle pencils, so I didn’t think the barrel size would matter, and it didn’t. However, the softness of the core does make a difference. With softer Luminance pencils, it was much easier to use the side of the core with the crayon grip and lay down lots of pigment quickly. In other words, the crayon grip works best with crayon-like pencils. And of course, generous pigment also makes a difference for the obvious reasons that it is applied quickly and blends more easily.

I’ve known for a long time that one reason Museum Aquarelle is my favorite on location is that it is the softest watercolor pencil I’ve used and is therefore very easy to apply quickly when I need to. While I prefer harder pencils for certain applications, softer ones serve me better when speed is important. That’s also one reason why Derwent Drawing Pencils are my favorite at life drawing.

I seem to have tapped into my inner crayon-using, 2-year-old self. 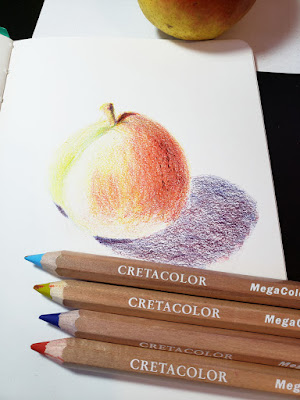 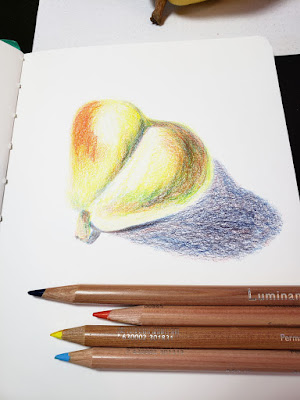