Ever since I started using Caran d’Ache Museum Aquarelles as my daily-carry colored pencils, I have been on the hunt for a portable sharpener that accommodates the Museum’s slightly larger-than-average barrel. At home I can use my trusty electric Bostitch or even a knife, but on the street, my choices are few.

For the past couple of years, I’ve been using a KUM 2-hole that is serviceable, but not ideal: While one of the holes fits, it’s a bit wobbly, so I must be careful or the point will snap. Still frustrated, I put a portable sharpener on my relatively short sketch material wish list a year ago.

A while back I tried writing directly to Caran d’Ache. Reminding the Swiss company that not all users of their products work in studios with access to desktop sharpeners or knives, I asked for a recommendation for a portable sharpener that would accommodate their premium artist-grade pencils with larger barrels, Museum and Luminance. I didn’t receive a response. Undeterred, I tried contacting the company a second time a few weeks ago, and this time I did get a response: I was referred to the Mobius + Ruppert (M+R) line of brass portable sharpeners. Although I have tried many portable sharpeners in my quest, this series had been off my radar because I assumed they were designed for conventional-sized pencils. The German-made sharpener comes in four styles. As a bonus, the blades are replaceable.

First I tried the double-hole round version, which was a personal favorite of the rep who responded to my inquiry. With expected robust German build quality, the sharpener looks like it could be run over by a tank unharmed.

I have tried so many sharpeners with dashed hopes that I was entirely skeptical when I stuck my first Museum Aquarelle in the recommended smaller hole (the larger is designed for use with charcoal, crayons and other chunky materials). It fit comfortably and securely – no wobble. Could it be . . .?

Yes! The grail I had been searching for! Museum Aquarelle, Luminance, Derwent Drawing Pencil – all pencils with larger-than-standard barrels – all sharpened beautifully! Look at those points (see top of page)! You can imagine what I shouted! Hallelujah? 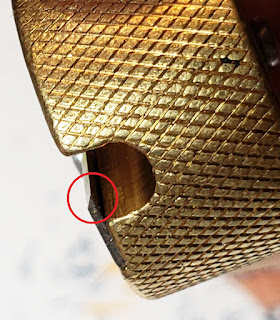 For an $8 sharpener, you’d expect to be able to use it without injury. I wondered if the design I chose was particularly faulty – the two blades lie perpendicular to each other, so it’s especially awkward to hold without encountering the dangerous points. Since I like to have multiples of anything useful, especially grails (one for my bag, one for my desk, one for the kitchen where I sketch birds at our feeder . . .), I decided to spring for the other three models, too.
Although all three of the other models – the single- and double-hole wedges and single-hole grenade – are easily held without coming in contact with a blade corner, I gingerly felt the edges, and they all have the same design flaw: The blade corners are exposed. Reaching into a bag pocket could still result in a nasty surprise.

Without doubt, the M+R sharpeners are keepers. They are the best portables I’m likely to find for my difficult-to-sharpen Museum Aquarelles, and I’m happy that they are built ruggedly. I’d advise filing the blade corners before using.

Who knew that drinking from the grail cup could cut a lip?

Updated 4/26/19: Both the safety issue and the messy issue have been solved with an even better M+R portable sharpener!
Posted by MiataGrrl at 7:00 AM