When I travel, I feel compelled to sketch all the “big” sights – the monuments, architecture and landscapes that make the location unique. But as you know, people are one of my all-time favorite sketching subjects, no matter where I am in the world. While riding public transportation and during other downtime, I often made small portraits of people around me, just as I do when I’m home.

While thinking about this, I started to write that contemporary urban people look pretty much the same everywhere – the same types of clothes and hair and (phone-staring) gestures. But that’s not true. In fact, in general, the Japanese dress better and have much better styled hair than people in Seattle. And the other thing that struck me in Japan is this: I kept seeing people that reminded me of my brothers or my mom. That doesn’t happen often when I’m sketching people in Seattle!

One day we took a break in Ginza, Tokyo’s high-fashion shopping district that rivals Paris or New York. We didn’t know it before we walked in, but that Starbucks turned out to be Japan’s first (now there are many all over the country). A mural in the store pictured the very first Starbucks ever – the one in Seattle’s Pike Place Market – and when the barista asked me where I was from, we ended up chatting about these “firsts.”

Incidentally, that brief conversation was one of many I had with various retailers, clerks, restaurant servers and even innocent passers-by using my very rudimentary Japanese-language skills (which land somewhere between caveman and kindergarten, both in vocabulary and expressiveness). Although many Japanese people have relatively good English skills, they are shy about using them, and I try to make an effort to use the language of the people I’m visiting, so I always took the initiative to speak Japanese whenever possible. As you might guess, hilarity (as well as some pantomime) often ensued. But if there’s one thing you can say about the Japanese, it’s that they have astounding customer service. I was impressed and sometimes touched by the efforts people made to answer our questions or help us get what we needed. 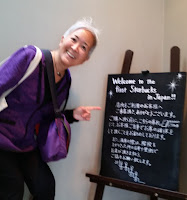