Japan, Part 4: The Colors of Japan

Five years ago when we had visited Japan at exactly the same time of year, we discovered brilliant fall colors everywhere, especially in Kyoto. We’d planned our trip this year with the hope of repeating that same lucky timing, but alas, our timing was off (or climate change was off – it’s hard to know which). As it was in many parts of the world this year, temperatures were warmer in Japan, so many of the red maples we’d seen previously had yet to turn. Although the cherries had turned and already fallen, other trees were still green in both Tokyo and Kyoto.

Our best views of fall color were in Kawaguchi-ko, one of the famed Fuji Five Lakes at the base of Mt. Fuji. We spent one extravagant night in a traditional Japanese ryokan (inn), where we further reserved an extravagant hour in a private “family” bath (as opposed to public bath) – but not to bathe! The family bathing room, we knew, had a breathtaking view of Fuji-san, as long as the elusive peak was out. We took our chances and booked the tub in the late afternoon – and we were rewarded! Rather than relaxing in the hot mineral water, Greg spent most of the hour trying to photograph Fuji (not easy to do when you’re buck naked in a tub and trying not to get the camera wet!). After a few minutes, Fuji ducked behind clouds, and that was the last we saw of its majesty. Seeing Mt. Fuji has been one of my travel goals for many years, so even that brief glimpse made our entire trip worthwhile.

Did I sketch it? Sadly, no. If I’d thought I would have had more than a few minutes, you know I would have pulled out my sketchbook even in the water! Instead, I decided to simply enjoy the amazing view for however long it lasted (and soak in the tub, which was also pretty terrific).

The village of Takao about an hour outside of Kyoto was a good source of fall color, too. Some maples had yet to turn, but others were moving toward yellow and orange. Takao was where I saw some of the tiniest maple leaves I have ever seen, each spreading its hand of delicate lacy fingers.

Our most reliable source of color in Japan turned out to be our meals! As you know, I don’t have much of a track record for sketching my food – even if I want to sketch, hunger always seems to win! – and it wasn’t much better in Japan. The one difference was the bento box meal. We usually bought them before boarding a long train ride, which meant that I wasn’t necessarily hungry yet at the time of purchase – an ideal sketch setup! Riding the high-speed Shinkansen from Tokyo to Kyoto, a ride of a little less than three hours, gave me plenty of time (and space! The tray has a lot more room than on an airplane) to sketch a bento box with full watercolors, eat the meal and even have coffee and Toppo for dessert afterwards. 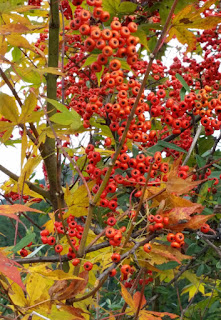 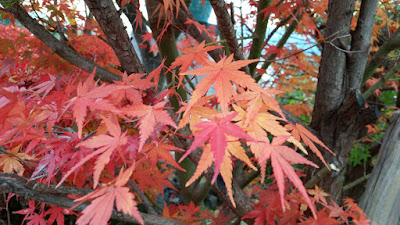 Posted by MiataGrrl at 6:04 PM