Hard Enough to Write With

With my recent interest in vintage colored pencils, I’ve come to find that one of the biggest differences between them and contemporary colored pencils is that the former are generally harder. Much harder. A few older brands like Eagle/Berol Prismacolors, Faber-Castell/Venus Spectracolor and American Venus Paradise are very soft, but they are exceptions. Based on clues I’ve gleaned from marketing copy on some old boxes I have, colored pencils back in the day seem to have been targeted more toward architects and drafters rather than artists or coloring book fans as they are now. If that was the intended audience, then I can see that a harder core would have been preferred by designers and drafters making thin, crisp lines. Contemporary users, however, probably demand a softer core and more intense colors. (Or perhaps pencil manufacturing technology has improved over time, enabling pencils with softer cores containing more pigment to be made. But that’s speculation.)

I’ve talked before about how I have specific uses for both soft and hard colored pencils (just as it’s useful and often necessary to have several grades of graphite pencils). But as I’ve reviewed various vintage colored pencils that turned out to be harder than any contemporary colored pencils I’ve used, I started thinking about how some of them are so hard that they could be used for writing as well as drawing. When I want to write with color, I tend to choose fountain pen inks or gel pens, but every now and then a colored pencil is just right. I know, too, that many editors and teachers use colored pencils to correct or mark up copy. Colored pencils hard enough to write with have their place.

Since today is National Pencil Day, I decided to write this crossover review: I compared some of my hardest colored pencils and selected the ones I could see myself writing with for whatever reason. Some contain enough pigment that they are also excellent for detail work in drawing.

Shown below are scribble tests I made on a sheet of ordinary copier/printer paper, which is often what editors and teachers need to write on. While the hardest cores are the vintage Eberhard Faber Mongol, Wallace Invader, Eagle Verithin and Dixon Anadel, they also contain the least amount of pigment, making them harder to see.

My favorites are very slightly softer but also contain enough pigment that they are practical for writing: vintage American Venus Unique and vintage Stabilo Schwan. The Stabilo is a good balance between hardness and color intensity, but it’s also scratchy compared to the Venus Unique.

Because these vintage pencils can be difficult to find (though perhaps not as difficult as you might think – I see some of them on eBay fairly regularly at reasonable prices, and often they are sold by the box for a single color), I also tested a couple of the hardest contemporary colored pencils I own – Prismacolor Col-Erase and Prismacolor Verithin. They are about the same in hardness and color intensity, but I tend to favor the Verithins because they are available in a wider color range and feel a little smoother. (By the way, forget about using the eraser attached to the Col-Erase; it’s apparently just for show.)

A third contemporary pencil that I couldn’t include in this comparison is the Staedtler Noris. Very hard, possibly harder than either Prismacolor mentioned above, Staedtler Noris colored pencils are available in a wide range of colors. Instead of wood, the cores are covered in Wopex, which is some kind of recycled product that makes me think of plywood. The reason that I couldn’t include them in my comparison is that the first time I sharpened one, I broke my electric sharpener on it! (Note to self: Plywood can’t be sharpened.) I immediately got rid of the (admittedly inexpensive) set. However, if you use a knife to sharpen them, I think they might qualify as a good colored pencil for writing.

As a final test, I used my top three – vintage American Venus Unique, contemporary Prismacolor Verithin and vintage Stabilo Schwan – to write in a Baron Fig journal, which is a bit toothier than copier/printer paper. All three were fine, though the Venus was my favorite for being the smoothest.

When I say these are hard enough to write with, I’m not talking about H or HB hard; I’d say they are more like 2B or Blackwing Pearl hard. Some writers would find that too soft, but I prefer writing with softer pencils, so they are good enough for me. Some of those vintage pencils that are too light in pigment are probably closer to an HB.

If you are not a writer, editor or teacher and have no use otherwise for writing with colored pencils, let me just say this: We can all use more color in our lives. Why not write today’s shopping list with a colored pencil? 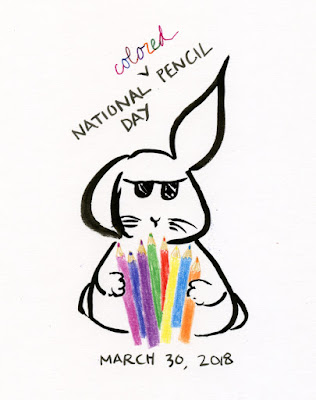