Almost all of the Eberhard Faber Colorbrites in my collection came to me unsharpened as new old stock from Ana Reinert after she’d heard that I was interested in vintage colored pencils. A couple came in the eBay mixed lot. The dozen or so display at least two logo and brand variations, and “Woodclinched” and “USA” are treated in slightly different ways. Most have a colored end cap that matches the hexagonal barrel color and a gold band; two have a grooved silver end cap.
As when I was writing the Mongol post, I couldn’t find much historical information about Eberhard Faber except on Wikipedia, and even there it was a bit confusing. But I found nice images on the blog Pencils and Other Things that show a well-preserved boxed set with silver end caps. In that post, Sola notes that the red, yellow and green pencils say, “Recommended for print marking,” while the others do not. I spotted the same text on my Scarlet pencil but not the rest. A blog commenter implied that pencils with the colored end caps were older than the silver.

As far as I know, this brand is no longer in production, so unlike with Prismacolors, I had no expectations one way or the other. Test scribbles indicated that they were medium-hard, so I thought they’d be a good match for Stillman & Birn Alpha’s slightly toothy surface, where softer pencils can’t get into the texture easily. I had difficulty building up color, though, so I gave up halfway through a sketch and switched to the smoother Epsilon paper, which was better. I usually find Epsilon to take softer pencils better, so I was a bit perplexed – to my hand, Colorbrites feel hard and retain a good point, yet they interact with smooth paper as if they are softer. I can’t explain that.

In my vintage pencil series, I’ve been trying to remain “pure” by using only the brand I’m reviewing in the sample sketch. However, I don’t have a yellow Colorbrite, so I substituted a vintage canary yellow Col-erase and a vintage Verithin in olive green, which seemed to have a similar hardness. They all blended and played together well. (I was especially pleased with the detail I was able to get on the tomato’s leaves and stem, but that came mostly from the Verithin.)

Colorbrites are probably not pencils I’d continue to acquire for use, but I love having these beautiful specimens along with the Mongols to represent the Eberhard Faber side of historic pencil manufacturing.


Read the rest of my vintage colored pencil series. 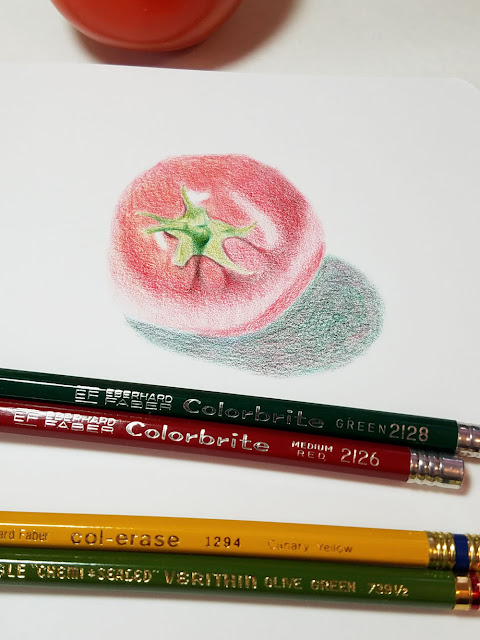