Did my blog post title get your attention? It got mine when I saw it as the subject line of an e-mail I received today.

On a few occasions, I’ve seen goats “mowing” hilly, overgrown properties within the city, but they’ve always been too far from the street to sketch. My friend Tony let me know that a herd of goats was busily at work near I-5 in the Roosevelt neighborhood, in case I was interested in sketching them. Who could resist a lead like that? I dashed right out.

The goats, managed by Rent-a-Ruminant, had quite an audience when I arrived at the property just off the Northeast 65th Street freeway exit. People of all ages were peering through the chain link fencing, snapping pictures of the ruminants as they grazed on long grasses, weeds and blackberry bushes. The land slopes up abruptly there, and I could see how humans with power mowers would have difficulty clearing the area, but it was no problem for these hungry goats. A human team member helped them out with a weed whacker.

Capturing a large number of goats grazing on the slope in 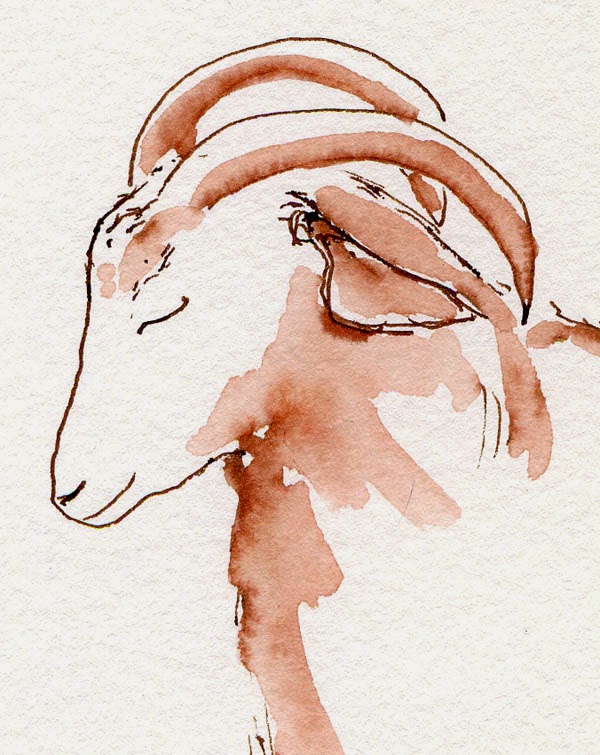 one composition was difficult. After a while, I gave up on that and moved over to a flatter part of the property, where nearly half the herd (I counted a total of 38) was chewing their cud or simply dozing. These resting ruminants gave this city girl a rare opportunity to sketch details of their strange horizontally slotted eyes and wispy beards. Sure, I’ve sketched goats at the Puyallup Fair and Woodland Park Zoo, but somehow these urban goats seemed more laid back. After all, they get hired to eat, rest and repeat – not a bad way to earn a living.

Posted by MiataGrrl at 6:00 PM