I haven’t used watercolors much since I became fully entrenched in colored pencils. My recent minimalism challenge, though, had gotten me thinking more about the general issue of portability and compactness, regardless of preferred media. My strategy during this challenge was to minimize my palette and make the most of every tool. However, if I were anticipating a sketching situation in which I needed lots of hues but still wanted a tiny kit, Viviva Colorsheets might be ideal.

Concentrated watercolor paint stored on paper has intrigued me for a long time: Thin and lightweight, it seems like the ultimate portable paint kit! Several years ago when I first began urban sketching, I bought a booklet of Nicholson’s Peerless Water Colors with that thought in mind. Around the same time, I serendipitously found a vintage booklet of Nicholson’s Peerless Japanese Transparent Water Colors in an antique store. I don’t know how old the booklet is, but the last copyright date on it is 1923!

The antique sheets are so tattered that I’ve only used them to swatch the colors, but even after all these years, they are still bright and saturated.

Once I even tried making my own watercolor sheets by applying watercolor crayon pigments heavily to a sheet of watercolor paper. (It worked, but not for very long.)

So although the concept of watercolor paints stored in booklet form is not new or innovative, Viviva Colorsheets made significant improvements on Nicholson’s Peerless when the company developed its product with Indiegogo funding a couple of years ago.

The first great idea with Viviva Colorsheets is the staggered page ends with colored index tabs, which make it much easier to find the color you want rather than constantly flipping through all the pages.

Each page has two pigment tiles. A space is given under each pigment area to make a small swatch.

Many pigment tiles, especially the blues and violets, look very different from the hues that result from them, so it’s imperative to make swatches before using the paints, or you’ll be in for big surprises. 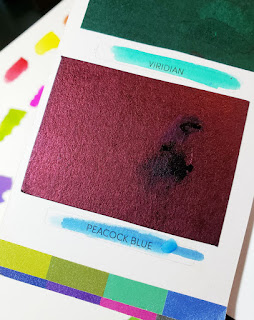 As “Viviva” implies, all the colors are vivid and saturated (swatches made on Canson XL 140-pound watercolor paper).  Since anyone (like me) using Viviva Colorsheets instead of traditional watercolor paints would probably give priority to convenience and portability, I used a waterbrush instead of a true paint brush on these swatches and the sketches in this review.

A second good idea is the sheet of nonstick glassine bound between every two pages of color to keep the pigments from mixing and sticking to each other.

The last innovation is a great idea in theory – but in practice, not so much. It’s the mixing palette that’s inserted in the back of the Viviva booklet. As suggested, I adhered the mixing palette, which is made of a heavy paper with a non-absorbent surface, to the booklet’s inside back cover. 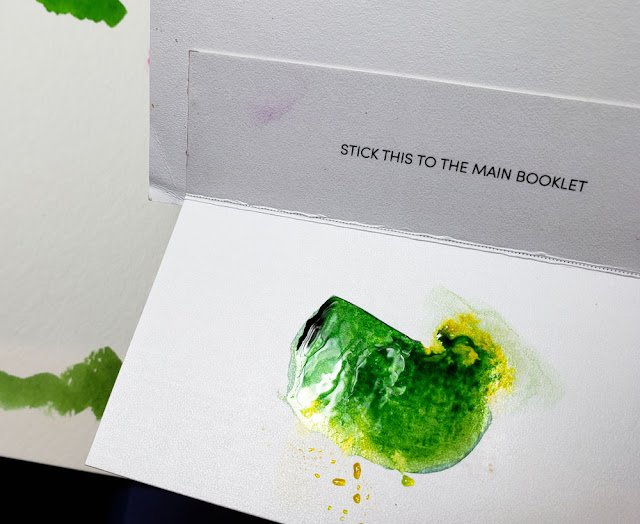 I love the idea of having everything so compact and handy this way. But when I actually tried to mix the paints, I found it awkward to shuffle among the booklet’s pages with a puddle of wet paint attached to the same booklet. (I made a mess and continued the rest of my experiments with a traditional mixing palette not attached to the booklet.)

One of the most challenging aspects of using traditional watercolor paints is controlling the ratio of water to paint and therefore creating the desired intensity of the hue. With Viviva Colorsheets, I find that challenge to be far greater – they are very different from tube or cake paints. As with any medium, more practice would probably yield better results. (The Viviva Indiegogo page shows many examples by artists who achieved beautiful results that you’d have difficulty distinguishing from traditional watercolors.)

Personally, I had the best results when I used the “coloring book” method: I drew an image with a waterproof Sakura Micron pen, then colored it with Viviva, almost like markers. (Sketch samples made in Stillman & Birn Beta sketchbook.)

In fact, the “coloring book” sketch made me realize that I was looking at Viviva Colorsheets in the wrong way. I don’t think they’re best used as traditional watercolors (or at least I found that they amplify the challenges of watercolor paints); it’s much better to think of them as markers or colored pencils. The tiny booklet is far slimmer and lighter than 16 markers or even 16 colored pencils. Forget about mixing and just have fun using these brilliant hues straight from the booklet. Packed with a waterproof pen and a waterbrush, that’s a pretty darn compact and convenient sketch kit that’s filled with color.