For the past month or more, I’ve been thinking about streamlining my sketch kit (at least temporarily). My goal was to begin in January when I was done with festive holiday colors, but I finished filling a signature of my usual DIY sketchbook at Swanson’s last Friday, so I dumped out my bag the next day.

As I mentioned in last month’s post, I think my sketch kit always begins with the sketchbook, which guides all the other choices. Without much expectation for color in these wet and gray months, it’s a good opportunity to give toned paper the solid trial I have been wanting to give it, so a 5 ½-by-8 ½ inch Stillman & Birn Nova is my sketchbook of choice. A few months ago I gave the gray one a shot for urban sketches, but I really enjoyed using the tan one for life drawing at Drawing Jam a few weeks ago (and more recently at Zoka Coffee). I’m starting this personal challenge with the tan one, but I may switch to gray if I feel like it, just for a change (all other tools would remain the same).

In the past when I’ve experimented with using a S&B softcover sketchbook as my daily-carry, I’ve found it to be bulkier than I like (especially compared to a single signature of paper, which is my usual daily-carry). But with all my colored pencils and other materials taken out, my bag has plenty of room for it.

In addition to a Nova as my primary sketchbook, I’m also carrying a small Field Notes notebook as always. Normally I prefer a red one, but since that’s basically toned paper too, it seems redundant during this challenge. I’m starting with a white one, which would give me different options while using the same tools.

As for those tools, here’s my carefully considered selection (from top): 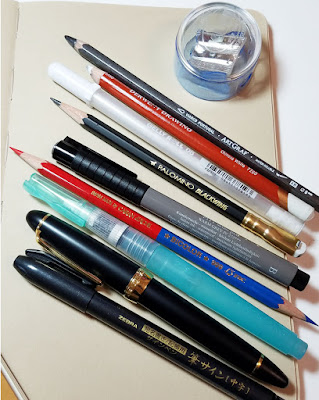 My intention is to stick to this basic set of tools, but as with the sketchbook, I reserve the right to switch out one implement for another if something isn’t working as I had hoped. But I want to avoid thinking about the kit and switching materials every time I go out, because that would defeat my guiding principle of keeping things low-maintenance.

These specific tools weren’t difficult to choose; most of them appear on my list of 2017 Top Products, so they are already time-tested and trusted. But there’s an important reason why I am committed to sticking with this particular number of tools: It’s exactly the number that fits in this beautiful case, which also has room for a Field Notes notebook or a 3 ½-by-5 ½ inch Stillman & Birn sketchbook. Slim and compact, it fits nicely in my bag. (It’s a prototype case that I’m testing for the manufacturer. It hasn’t been released publicly, so I’m not allowed to talk about it, but I’m really hoping it will eventually go into production.) The case is not just convenient and attractive; it’s also self-enforcing. If I want to put something new in, I must take something else out or it won’t fit. It’s going to keep me honest for this self-challenge.

Although bag weight is not a primary concern or motivator for this challenge, I have had shoulder issues in the past, so I do try to minimize the weight of my daily-carry in general (and especially when I travel). I weighed my bag with all my usual gear, and it came in at just under 4 pounds (1.78 kg). With my slimmed-down kit, my bag now weighs about 3 ¼ pounds (1.49 kg). I’m a bit surprised that it doesn’t weigh even less, but the S&B sketchbook weighs quite a bit more than a single DIY signature.


That’s it – my super-minimal, daily-carry kit! I am committed to it until the S&B Nova sketchbook is full. And just because I know you’re curious, shown below are all the things I took out of my bag!


Will I miss all my colors and other materials and regret this challenge? Or will I realize I can do without a lot of stuff permanently? We’ll both find out! Anyone want to join me in this quest for minimalism? (Don’t worry – it’s just temporary. 😉)

Edited 2/19/18: Find out about the results of my two-month minimalism challenge!
Posted by MiataGrrl at 6:00 AM