The last official sketch crawl was Sunday morning in historic Old Town, “the birthplace of California.” Except for the Church of Immaculate Conception, I wasn’t quite as inspired by the architecture there as I was at Balboa, so I focused on capturing some of the many types of palm trees and huge cacti I spotted everywhere.

During lunch at the Rockin’ Baja Lobster Coastal Cantina (“Eat, Drink and Be Baja!”), we were given a free photo of ourselves to laugh at over our tasty but overpriced tacos. Refreshed, Mark, Lynne and I decided to catch the trolley to the scenic waterfront.

The highlight of my day was sketching the incredibly humongous USS Midway aircraft carrier, now a museum and attraction. I wasn’t even going to bring my landscape-format sketchbook on the trip, but I’m glad I threw it into my roller bag at the last minute. Even with the full horizontal spread, I could barely fit the whole ship. Right next to the ship is the 25-foot sculpture, “Unconditional Surrender,” inspired by the famous photo of the sailor kissing a nurse at the end of World War II. Ironically, even that huge sculpture is dwarfed next to the Midway.

After the hour-plus I spent on that sketch, I was exhausted. I left Mark there still inking his sketch to make my way back to my hotel. As I walked along the waterfront, I saw the stately Star of India that I had initially spotted from the cab ride to the restaurant Friday night. Suddenly perking up, I stopped to make one last sketch of the weekend. Built in 1863, it’s the world’s oldest active sailing ship. (I apparently learned how to become invisible in San Diego. Sketching the ship, I think I broke a personal record for the number of times people came and stood right in front of me, blocking my view, to gawk or take photos of the ship – completely unaware of me!)

Of course, I couldn’t fly home without that mandatory airport gate sketch and some fellow passengers across the aisle: a little girl who dozed off while watching cartoons on her DVD player. Her dad dozed off even sooner than she did.

Next year’s Fourth Annual West Coast Sketch Crawl will be a little closer to home – in Tacoma! We’ll have a hard act to follow putting it together – the San Diego team worked hard all year and all weekend to give us a terrific sketch event! 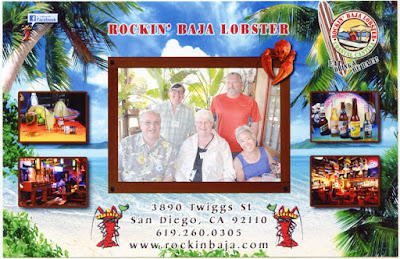